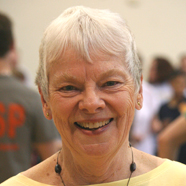 MOLINE — Even as a child growing up in Moline, Sharon Dodd could be counted on to stand up for those who needed protection and support.

“Whenever someone was bullied I would be there,” she said. “If there’d be somebody being made fun of on the playground I would go up and say, ‘Stop it!’ It just always, always upset me that it would happen.”

And there are the 110 teens and adults with special needs who have a stronger relationship with Jesus because of her work with SPEC, its board and its many volunteers. Dodd looks to them to keep the ball rolling.

“For many years the board was the parents who got it started,” she said. “Now some of the SPEC board members are my former volunteers. They’re young people. It’s time to pass the baton on the younger people and get fresh ideas.”

TEACHING WASN’T WORK
Accepting that baton are Janaan Roberts, a former SPEC volunteer and the mother of a special needs individual, and Linda Matheis, who has been working with Dodd.

SPEC meets on Wednesday evenings from October through the first week of May. The first half of the 90-minute sessions are devoted to lessons, which will be planned by Jean McGonigle. Linda Madsen will handle crafts for the second half of the sessions.

What makes the program run are the student volunteers, who provide one-on-one attention for their special friends. Dodd credited the teens from Seton Catholic School in Moline, Jordan Catholic School and Alleman High School in Rock Island, and the Moline High School students who come to SPEC through the parishes’ religious education programs for making the program a success.

To show her that they treasure her shining example, those involved in SPEC had a star named for Dodd: Spectacular Sharon. They presented their gift to her at the closing Mass on April 30.

Her star as a teacher started to rise after her graduation from Sacred Heart School and Moline High School. She attended Illinois State Normal University, earning a bachelor’s degree in special education with a minor in elementary education. She would go on to earn a master’s degree in reading from Marycrest University in Davenport, Iowa.

She worked for a time in the LaGrange Special Education District and it was then that she became aware of Catholic students who couldn’t be accommodated in parochial schools. At that time classes were too large to allow the teachers to provide the attention they needed.

“I had no textbooks. I would make up my own lessons,” Dodd told The Catholic Post.

After starting a family with her husband, George, she taught religious education at St. Mary in Moline, but wouldn’t return to the classroom full time until her daughter and two sons were ready for college. What followed were 20 happy years as a fourth grade teacher at Seton Catholic School.

“I always went into education with the team approach — myself, the parents and the student. If one of us let down, the others had to help out,” she said. Her creative approach to lessons earned her the nickname of the “Post-It note queen” because her ideas would be pasted all over her textbooks.

When Dodd retired from Seton her daughter told her, “Gee, Mom. It isn’t everyone who has gone to work with a smile on her face.”

She doesn’t know what comes next, but isn’t worried. She likes to read and travel and there are some volunteer opportunities that interest her.