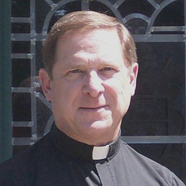 Photo Caption: Father Schaab will celebrate a Mass of Thanksgiving at 11 a.m. on Sunday, June 8, at St. Pius X Church in Rock Island. A reception will follow from 2 to 5 p.m.

ROCK ISLAND — Bees, chickens, fruit trees and vegetable gardens on a 15-acre farm await the attention of Father R. Michael Schaab when he transitions to senior status next month after a 43-year priestly career.

But tending to matters of faith — his own and that of others — will take precedence this summer before the pastor of St. Pius X Parish settles into his rural retirement plans.

Father Schaab, who turned 70 in early March and has guided St. Pius X for nine years, will head to the University of Notre Dame shortly after his retirement takes effect on June 11 to present a workshop on preaching.
Then, from July 6 to 15, he and Rabbi Tamar Grimm — also of Rock Island — will lead nearly 50 pilgrims on an Interfaith Israel Experience that has been planned for months.

Father Schaab loves nature, but has long recognized that his Christian faith — and vocation — needs a community of people.

“The idea of the ‘People of God’ has always been uppermost of my experience of faith,” he told The Catholic Post in a May 16 interview. “I never saw it much as individualistic.”

Father Schaab will share his gratitude to God and the people he has served by celebrating a Mass of Thanksgiving at 11 a.m. on Sunday, June 8, at St. Pius X Church. A reception will follow from 2 to 5 p.m.

Also granted senior status by Bishop Jenky is Msgr. Dale Wellman, 75, pastor of Sacred Heart Parish, Moline. Msgr. Wellman, who is also celebrating his golden jubilee of priesthood ordination, was featured on the cover of the Jubilarian Section of the May 11 issue of The Catholic Post.

PARISHES AND CLASSROOMS
Father Schaab’s priesthood has been lived in parishes and diocesan administration, in the mission lands of Africa and in the halls of academia.

A native of the former St. Patrick Parish in Peoria, he entertained thoughts about the priesthood since grade school. After graduating from Spalding Institute in 1962, seminary studies took him to St. Bede Junior College in Peru, St. Ambrose College in Davenport, Iowa, St. Paul Seminary in Minnesota, and Catholic University of America in Washington, D.C.

Always ready to drop in a comic remark, Father Schaab noted that Bishop John B. Franz — who ordained him on May 22, 1971 — retired just weeks after the ceremony “possibly in reaction to my ordination, I don’t know.”

His early assignments were as parochial vicar at St. Malachy, Rantoul, and Holy Trinity, Bloomington.

From 1977 to 1979 — the “years of three popes,” Paul VI, John Paul I, and John Paul II — Father Schaab worked on his doctor of sacred theology degree in Rome. Prior to finishing his doctorate thesis he was called home to become diocesan Director of Religious Education.

Among the major initiatives of his six years in that role was the introduction of the Rite of Christian Initiation of Adults throughout the diocese.

“It was a time when a lot of the little parishes were really challenged to take forward the theology of the Second Vatican Council and reform of the sacraments and put into practice, especially through religious education programs,” said Father Schaab. “So we did a lot of traveling around the diocese.”

And beyond. During those years Father Schaab also became a presenter with the North American Forum on the Catechumenate, giving workshops around the country. He called his long involvement in that group “a glue in my 43 years of priesthood, in that it took a lot of pieces of what I was involved in and kind of held them together, all focused on community.”

In 1985, Father Schaab was named pastor of St. Patrick Church of Merna, which was relocating to Bloomington’s expanding west side after a tornado had destroyed the church in Merna. During the six years he was pastor, St. Patrick grew from 90 families to 960.

“It was just an explosion of people,” said Father Schaab. “Very exciting. Lots of involvement, lots of young people, lots of enthusiasm.”

He also served St. Mary Parish in Downs, and lived in a tenant farmers’ home between the two churches.

EXPERIENCE IN THIRD WORLD
Father Schaab was granted a leave of absence for teaching in 1991.

“I had been looking for an experience in the Third World,” he told The Post. Bishop John J. Myers granted him permission to teach at a seminary in Lusaka, Zambia, in Central Africa. After three years there, he then taught for a year at St. Patrick’s College south of Dublin, Ireland, before returning to the U.S. for a year at Catholic Theological Union of Chicago.

Father Schaab returned to the diocese in 1996 as pastor of Mary, Our Lady of Peace, in Orion, with part-time teaching duties at St. Ambrose University. During his nine years in Orion, he oversaw a renovation of the church building.

Father Schaab added duties as administrator of St. Maria Goretti in Coal Valley for a few years prior to becoming pastor of St. Pius X in Rock Island in 2005.

While he points to last year’s completion of a school addition that united the campuses of Jordan Catholic School as a major accomplishment, Father Schaab again pointed to the people — their generosity, prayerfulness and cooperation (including ecumenically) — as blessings.

“There’s a vibrancy here of people caring for each other, and the people sharing their faith with other faiths,” he said.

As he nears retirement, it’s not surprising that Father Schaab’s advice to others considering the priesthood would include both God and God’s people.

“Be trusting,” he said. “Trust in God, and trust in the Spirit of God in the people.”