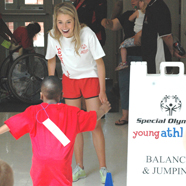 BLOOMINGTON — Do you remember how you spent the last day of your senior year of high school?

The 80 seniors of Central Catholic High School will never forget their final day on May 9.

“What better way to leave?” asked Maggie Herger, after she and her classmates hosted 340 Special Olympics Young Athletes for the culminating event of a year of training in skills such as throwing, kicking, and catching.

Many of the children, ages 3 to 7 from throughout Unit 5 school district, have disabilities such as speech impediments or physical or cognitive impairments. But on this joy-filled day, they were inspirational champions, heroes, and teachers.

“They teach us more than we can teach them,” said Kaitlyn Baughman who, with Herger, served as senior class co-chairs of the volunteer activity.

“I was trying to get the kids to actually do the activities,” said Baughman, “because they just wanted to dance and jump around the whole time. They just have so much fun in life and never worry about the small stuff. They are so enthusiastic about everything they do, and it makes me want to put more passion into what I do.”

Herger was inspired by the patience and perseverance of the participants as they moved from station to station, demonstrating their skills.

“They will not stop at anything,” she told The Catholic Post. “If they want to do something, they’ll do it, and it’s very inspiring. It gives me hope that whenever I come into a hard time, I’ll think of them and if they can do that, why can’t I?”

This is the second year that Central Catholic seniors have hosted the Unit 5 culminating event. Participants came from Brigham, Sugar Creek, and Parkside schools for both morning and afternoon sessions.

A LIFE-CHANGING EXPERIENCE
While Special Olympics competition starts at age 8, the “Young Athletes” event introduces younger children to the required skills and provides a very real Olympic experience. Participants, some in wheelchairs or walkers, were accompanied by flag-bearing members of the senior class as they entered the Central Catholic gym to Olympic musical fanfare and the applause of bleachers filled with parents and friends.

After opening ceremonies, the various skill demonstrations began with teams of athletes rotating between nine stations such as an obstacle course or jumping area. After receiving ribbons, participants then took part in a “Walk of Champions” throughout the school. The hallways were lined with Central Catholic students who applauded and offered “high fives” as the young athletes paraded past.

“At Central Catholic we try to instill in our students the value of serving others, especially through the works of mercy,” said Sean Foster, assistant principal. He explained that last year’s senior class selected Special Olympics as their class charity, raising more than $16,000 and hosting the Young Athletes culminating event. The experience was so positive that, while this year’s seniors have a different charity, the event has become a fixture on the Central Catholic schedule.

Randy Huberman, senior class adviser at Central Catholic, says the students tell him it is a life-changing experience.

“We don’t have a large population in our Catholic schools of special needs students,” said Huberman, “so for them to have an opportunity to work with this population is incredibly rewarding for them.”

In welcoming remarks at the opening ceremonies, principal Joy Allen called the young athletes “God’s gift to us.” And while rain moved the competition indoors — it was originally scheduled for the football field — it brought participants closer to spectators and a better look at “how truly special each one of these kids are.”

“These children have such great spirit,” said Allen.

Baughman and Herger said all the seniors looked forward to the event. In fact, some from the Class of 2013 returned to assist.

“After the stressful last week of high school, this is a great way for our seniors to end on a happy note and end with an extremely happy memory of Central Catholic,” said Herger.