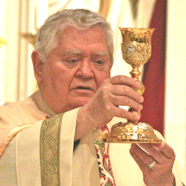 Photo Caption: Msgr. Wellman will celebrate a Mass of Thanksgiving for his golden jubilee and retirement at 2 p.m. Sunday, June 8, at Sacred Heart, Moline, where he has been pastor since 2001.

Editor’s note — This article was part of “Jubilarians 2014,” a 20-page special section in the May 11 issue of The Catholic Post profiling 88 priests and consecrated women and men who are marking significant anniversaries of ordination or religious profession. The entire section can be viewed by clicking on the “E-Edition” link at left.

Of the three men who are celebrating the 50th anniversary of their ordination in 2014, two are senior priests of the Diocese of Peoria and the third is about to join them.

Msgr. Dale L. Wellman, pastor of Sacred Heart Parish in Moline, is planning to move to Port Byron to tend to his garden and fish pond, raise some quail and pheasant, do a little painting, and “help out, as priests do.”

The golden jubilarians also include Father Patrick W. Collins, who retired to Douglas, Mich., and Father M. Duane LeClercq, who lives in McNaab. All three were ordained by Bishop John B. Franz on May 31, 1964, at St. Mary’s Cathedral in Peoria.

Born in Quincy on Nov. 10, 1938, Msgr. Wellman grew up in St. Mary Parish in Moline. He knew in grade school that he wanted to be a priest and his vocation was nurtured by the Benedictine Sisters who taught at St. Mary.
Msgr. Wellman also credited his pastors — Father Enos Barnes, Msgr. J.B. Reidy and Father Thomas P. Kelly — for their strong influence. Father Kelly would assist him at his first Mass on June 6, 1964, at St. Mary Church in Moline.

After two years at Alleman High School in Rock Island, Msgr. Wellman transferred to St. Bede Academy in Peru and stayed on at St. Bede Junior College for two years. He studied philosophy at St. Paul Seminary in St. Paul, Minn., and was in his first year of theology when he confirmed his call to the priesthood.

“I said, ‘Lord, I’m here. If you don’t want me you have to let me know, but I plan to stay,'” Msgr. Wellman told The Catholic Post. “Everything seemed to fall into place.”

After ordination he was parochial vicar at Immaculate Heart of Mary in Galesburg (1964-68) and St. John in Peoria, where he was also vicar of education (1968-69).

In 1969 Msgr. Wellman was asked to provide pastoral care for a new parish that was forming in Bartonville and serve as chaplain at Peoria State Hospital. He became the administrator of St. Anthony in Bartonville in 1972, the year they started building the multipurpose center that would be their worship space, and was named pastor in 1974.

What made it such a special time, he said, is that the parishioners were generous in sharing what they had.

“We had no paid staff, except for myself,” Msgr. Wellman said. “Everyone volunteered their time and talent.”

His next assignment took him from the newest parish in the diocese to one of the oldest, St. Patrick in LaSalle, in 1983. He helped parishioners celebrate the faith community’s 150th anniversary, made repairs to the rectory and renovated the church before moving to St. Ambrose in Milan in 1990.

He was named prelate of honor with the title of monsignor in 1993.
Msgr. Wellman has been pastor at Sacred Heart in Moline since 2001. In his years there, the coverings on the stained glass windows in the church have been replaced, the church has been redecorated, and the former convent, which now houses the parish offices, has a new roof and windows.

“I try to go to the hospital every day. You not only meet some of the parishioners, but some of the people who are inactive,” he said. “When people are sick, whether they’ve been going to church or not, they want the church present in their lives. Sometimes you can get them back to the sacraments and reconcile them to the church.”

Another important part of his ministry is serving as spiritual adviser to the Diocesan Council of Catholic Women, a role he has played since 1974.

“It gives the ladies a voice. It recognizes the gifts and talents of women in the church,” according to Msgr. Wellman. “The council should educate the women spiritually in matters of church and faith and society so they can be an active voice.”

Msgr. Wellman will celebrate a Mass of Thanksgiving for his golden jubilee and retirement on Sunday, June 8, at 2 p.m. A reception will follow in Culemans Memorial Hall.