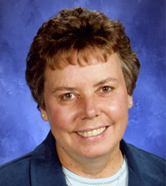 Photo Caption: Sister Rita Ann Bregenhorn, OSU, will serve a three-year term as leader of the Ursuline Sisters of the Central Province.

ST. LOUIS, Mo. — Sister Rita Ann Bregenhorn, OSU, pastoral associate at St. Patrick Church of Merna in Bloomington for the last 17 years, has been installed as the provincial leader of the Ursuline Sisters of the Central Province. She has served her community as a councilor on the provincial leadership team since 2008.

Assisting her as councilors are Sister Ann Barrett, OSU, and Sister Mary Ann Dooling, OSU, both of St. Louis; Sister Julie Hickey, OSU, of San Antonio; and Sister Jean Hopman, OSU, of Chicago. The leadership team, which is based in St. Louis, will serve a three-year term.

While the appointments were made earlier this year by Mother Cecilia Wang, general prioress of the Ursulines of the Roman Union, the team was not installed until April 12 at the Alton Convent Chapel. The announcement was made May 2.

“The first thing for any leadership team, the first priority, is always the well-being of our Sisters,” Sister Rita Ann told The Catholic Post. The province she is responsible for includes 101 Ursulines in Missouri, Illinois, Louisiana, Texas and Minnesota.

They are in the process of closing the convent in Alton, where the infirmary has been, and relocating the Sisters to skilled-care facilities in New Orleans and St. Louis. One of the reasons the installation was held in Alton is so the community could come together and offer a blessing to those who would be moving, Sister Rita Ann said.

“We will be looking at the communities and, as we become older, what is a life-giving situation for us,” she explained.

Acknowledging that the pace of life in provincial leadership is much different from parish ministry, Sister Rita Ann said she anticipates with joy getting to know her Sisters in a different, deeper way.

“I’m also looking forward to coming to know our sponsored ministries in places where we have academies and retreat centers and all the places that carry on the ministry of our founder, St. Angela Merici,” she said.

Sister Rita Ann went to St. Patrick Church of Merna in Bloomington in 1997.
“They were wonderful. They were truly a grace in my life,” she said of the parishioners, who wished her well at farewell receptions the weekend of April 5-6.

“I worked with a wonderful staff. It was such a collaborative effort to bring the real, loving presence of Christ into the lives of our parishioners,” Sister Rita Ann said. “They are good people who are ready to take the message and go forward with it. It was a real time of grace. It enabled me to grow in a different way.”

Sister Rita came back for the Easter Vigil at St. Patrick and has also been present for First Communion and confirmation.

“It’s a very different ministry than being pastoral associate,” she said of her new position, but this is where God wants me.”

Another member of the new leadership team has ties to the Diocese of Peoria. The daughter of Jeanne (Brooker) Hickey and James Hickey, Sister Julie was born in Lincoln and grew up in Elkhart. She made her vows with the Ursuline Sisters in 1977.

She taught briefly in Oak Park, but most of her ministry has been spent in Texas. Since 2009 she has served at Haven for Hope in San Antonio, a ministry for women, men and their children who are experiencing homelessness.