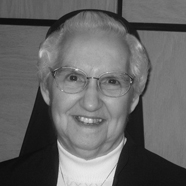 Photo Caption: Sister Anna Marie’s ministry was dedicated to teaching in schools of the Diocese of Peoria and care for the elderly.

WEST PEORIA — A Mass of Christian Burial will be celebrated for Sister Anna Marie Scheirer, OSF, on Tuesday, May 6, in the chapel of Immaculate Conception Convent, 2408 W. Heading Ave. Visitation is planned for 3:30 to 6:30 p.m., with the Mass at 7 p.m.

Born in Metamora on March 30, 1926, Berneda Mary Scheirer was the daughter of William and Anna Scheirer. She entered the Sisters of St. Francis of the Immaculate Conception on Sept. 8, 1951. Given the name of Anna Marie, she professed vows as a member of the community on June 13, 1954.

She had been living at the motherhouse in West Peoria since 2011.
Sister Anna Marie was preceded in death by her parents; four sisters, Lovina Klein, Pearl Scheirer, Anna Mae Noe and Generose Scheirer; and a brother, Morris Scheirer. She is survived by two sisters, Therese (Larry) Miller and Wilma (Norbert) Adams; two brothers, William Scheirer and Milton (Bernice) Scheirer; and her Franciscan Sisters, with whom she shared life for 60 years.

Memorials may be made to the Retirement Fund of the Sisters of St. Francis of the Immaculate Conception.