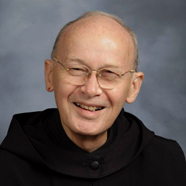 Photo Caption: A Mass of Christian Burial for Father Claude will be celebrated at 3:30 p.m. on Tuesday, May 6, at St. Bede Abbey Church in Peru.

PERU — Father Claude (John) Peifer, OSB, abbot emeritus of St. Bede Abbey, a former teacher at St. Bede Academy, and an internationally recognized scholar in Scripture, died suddenly of apparent heart failure at the abbey on Thursday morning, May 1, 2014. He was 86.

Additional visitation will be at the abbey church from 2:30 to 3:20 p.m. on Tuesday, May 6, with a Mass of Christian Burial celebrated at 3:30 p.m. Interment will follow in the abbey cemetery.

Born in Lincoln on Sept. 20, 1927, to John and Armella Peifer, he attended St. Mary School. He then was a boarding student at St. Bede Academy and College.

Father Claude entered the novitiate at St. John’s Abbey in Collegeville, Minn., in 1946, professing first vows as a Benedictine monk on July 11, 1947.

After completing his undergraduate studies at St. John’s University in Collegeville, he studied theology at St. Bede College in Peru from 1949 to 1952. He was ordained to the priesthood on May 22, 1952, at St. Raymond Cathedral in Joliet by Bishop Martin McNamara.

Following ordination, he traveled to Rome where he received a licentiate of sacred theology degree from Collegio di Sant’Anselmo in 1954 and a licentiate in sacred Scripture from the Pontifical Biblical Institute in 1956. He did additional graduate work at L’Ecole Biblique in Jerusalem.

Father Claude taught Scripture and theology in St. Bede’s academy, college and seminary from 1957 to 1969. From 1972 to 1994 he was chief financial officer and treasurer for both the abbey and academy, serving as acquisitions librarian during roughly the same period and returning to the latter work after his retirement.

From 1968 onward he held a variety of positions in monastic formation, serving for many years as novice and junior master and teaching classes to monks preparing for vows.

SCRIPTURE SCHOLAR, AUTHOR
Father Claude was active in the American Cassinese Congregation of the Benedictine order, attending and speaking at numerous General Chapters and serving on the Abbot President’s Council from 1974 to 1980 and again from 1989 to 2010. He gave retreats, lectures and workshops at monasteries and convents throughout the order.

A Scripture scholar, Father Claude served on the editorial board for the New American Bible and was an associate editor and contributor to The Bible Today. He also wrote a popular commentary on First and Second Corinthians, as well as numerous articles for The New Catholic Encyclopedia, The Catholic Youth Encyclopedia, The Encyclopedia of Early Christianity, and The Dictionary of the Middle Ages.

Father Claude’s literary influence in monastic circles was also widespread, having contributed regularly to The American Benedictine Review. His book “Monastic Spirituality” is a standard text for monks in formation. A Latinist, Father Claude served on the editorial board for the 1981 translation of The Rule of Saint Benedict, and wrote one of the appendices for the edition.

“The work he did for the congregation and the order is immeasurable,” said Abbot Hugh Anderson, abbot president of the American Cassinese Congregation, noting Father Claude’s service as author, consultant, adviser, historian, and friend to all. “When Abbot Claude spoke, everyone listened because we all knew the wisdom he possessed. He will be terribly missed.”