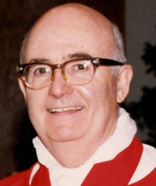 EAST MOLINE — A funeral Mass was offered on Friday, April 25, at St. Anne Church here for Father Robert D. O’Connor, a senior priest of the Diocese of Peoria and the former pastor of St. Anne’s as well as parishes in Mendota, Peterstown, Elkhart, and Mount Pulaski.

Father O’Connor, a former teacher and missionary with Maryknoll before coming to this diocese in 1975, died on Saturday, April 19, 2014, at the Kahl Home in Davenport, Iowa. He was 85.

Visitation took place at both St. Anne’s Church in East Moline and St. Catherine Church in Aledo. Father O’Connor had resided at the Aledo parish in recent years.

Burial will be in St. Mary Cemetery, East Moline.

Born May 11, 1928, in Medford, Mass., to Daniel and Ellen “Nellie” (McCarthy) O’Connor, Father O’Connor entered Maryknoll Junior Seminary in Brookline, Mass., in 1945 after graduating from high school. He completed his preparation for the priesthood at Maryknoll Seminary in New York and was ordained a priest for the Catholic Foreign Mission Society of America at the seminary on June 11, 1955.

Father O’Connor served on the faculty of Maryknoll’s junior seminary in Clarks Summit, Pa., from 1955 to 1966, primarily teaching Latin and also in leadership roles as director of guidance and vice rector. In 1967, he began six years of service as a Maryknoll missioner in the Andes Mountains of Peru, South America. Most of his parishioners were Aymara Indians.

During a three month leave from missionary work, he came to central Illinois to serve as a “guest priest” in parishes while learning farming techniques he could bring back to benefit those he served in Peru. He told The Catholic Post on the occasion of his golden jubilee in 2005 that he enjoyed parish life in this diocese, believed that as he was getting older being a diocesan priest “might be a better fit,” and was granted permission to stay. His first service here was as parochial vicar at Immaculate Heart of Mary Parish in Galesburg and later Holy Cross, Mendota.

Following his incardination to the diocese in 1978, he was named co-pastor of the Mendota parish and Sts. Peter and Paul, Peterstown. From 1981 to 1987, he served as pastor of St. Patrick, Elkhart; St. Thomas, Mt. Pulaski, and St. John, Middletown, with a brief time as a chaplain of Logan Correctional Center in Lincoln.

From 1988 until his transition to senior priest status in 2003, Father O’Connor was pastor of St. Anne in East Moline.