Children of God must take up the ‘family business,’ which is mercy 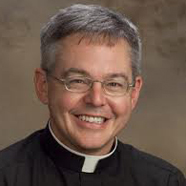 By: By Msgr. Stewart Swetland

Today in Rome, Pope Francis will canonize two of his predecessors: St. John XXIII and St. John Paul II. Every canonization is a celebration of God’s mercy toward his human creation. None of us, without God’s grace and forgiveness, deserve to be with him forever in heaven. As St. Paul teaches, “All have sinned and fall short of the glory of God” (Romans 3:28).

However, we know with certainty, by the authority given by Jesus to his church, that Angelo Roncalli and Karol Wojtyla are already in heaven enjoying union with God and all others in God and interceding for us, their brothers and sisters, as we fight the good fight of faith. All the church rejoices in the celebration of the victory of Christ in the lives of these two men.

In particular, today’s celebration is an illustration of God’s mercy because both of these men were known for their preaching and teaching of the mercy of God. When John XXIII called and opened the much needed Second Vatican Council, he explicitly spoke of the need for the church to emphasize the value of mercy rather than condemnation.

St. John Paul II’s pontificate, in many ways, completed what St. John XXIII began by codifying the renewal of the Council in the 1983 Code of Canon Law and the 1992 Catechism of the Catholic Church. These two massive works are steeped in the teaching of the Council. He also placed the idea of Divine mercy “front and center” in the church’s pastoral ministry by canonizing St. Faustina Kowalska (the saint of Divine mercy), instituting Divine Mercy Sunday, and publishing his great encyclical “Dives in Misericordia” (“Rich in Mercy”).

In this encyclical, St. John Paul wrote: “The truth, revealed in Christ, about God the ‘Father of mercies,’ enables us to ‘see’ him as particularly close to man, especially when man is suffering, when he is under threat at the very heart of his existence and dignity. And this is why, in the situation of the Church and the world today, many individuals and groups guided by a lively sense of faith are turning, I would say almost spontaneously, to the mercy of God.”

MISSION OF MERCY
Another way of saying this is that Jesus sees his very mission as one of mercy. In his human nature, Jesus is like us in all things save sin (cf. Hebrews 2:17, 4:15). He had a particular vocation — to reveal to the world the merciful love of the Father. Everything he did and said was to help the world come to know and see just how much the Father loves us.

Not only did Jesus reveal to us the merciful love of the Father, but he also taught that all of his followers must show the same mercy in their lives. The “reward” for mercy is mercy. The measure we measure with will be measured back to us (cf. Matthew 7:2).

This central truth of our faith is so well demonstrated in today’s Gospel reading. Our Risen Lord cannot wait to see his disciples again. Despite their fear and hiding, he appears to them. He greets them with the gift of peace and convinces them that it is really him raised up and glorified. Then, showing his utmost concern that his ministry of mercy continues, he breaths on them the gift of the Spirit and empowers them to continue his mission: “Whose sins you forgive are forgiven them; whose sins you hold bound are held bound” (John 20:23).

May all of us this Divine Mercy Sunday take up this call to be “missionaries of mercy,” to reveal to a world in need the good news that God always loves and forgives, for he is indeed “rich in mercy” (cf. Ephesians 2:4).

MSGR. STUART Swetland, a priest of the Diocese of Peoria, is the Most Rev. Harry J. Flynn Professor of Christian Ethics at Mount St. Mary University in Emmitsburg, Md., and director of the Center for the Advancement of Catholic Higher Education.