‘A warm welcome home’ for hundreds at Easter Vigil liturgies 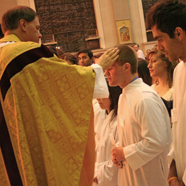 Photo Caption: Msgr. Gregory Ketcham anoints Ryan Ochs during his confirmation at the Easter Vigil at St. John’s Chapel in Champaign on April 19.

He walked into the Easter Vigil at St. John’s Chapel here as the son of Kent and Patty Ochs and the older brother of Derek, and walked out a newly baptized child of God.

He was one of nine baptized by Msgr. Gregory Ketcham, chaplain and director of St. John’s Catholic Newman Center, and among the 22 men and women who were confirmed and received the Eucharist for the first time that night. The philosophy student, a junior at the University of Illinois, looked to another philosopher, St. Thomas Aquinas, for his confirmation name.

“I felt joy at watching and hearing my fellow catechumens and candidates receive the sacraments that they received that evening, and was overjoyed at the outpouring of God’s love through the congregation that gave us all a warm welcome home,” Ochs later told The Catholic Post.

With baptism came a great sense of calm and peace that filled his heart with hope, praise and happiness for Ochs. That hope and love intensified during confirmation, he said.

Then came the sacrament he had longed for the most — the Eucharist.

“Not only was it quite emotionally overwhelming, but I could feel that intimacy between me and God and that great love in that very personal relationship He wants with me and that I am working to build with Him,” Ochs said. “I could feel His love working in me almost right away.”
While he finds it easy to love his neighbor, Ochs explained that he can be shy about reaching out and embracing “my brothers and sisters in Christ.” Not that night.

“I felt called, almost compelled to do so and I was at peace,” he said. “I can only attribute this to God’s love working in me and though that is the work of all the sacraments I received that night, I can definitely attribute it to God’s love within the Eucharist working within me.”

Ochs quoted St. Thomas Aquinas: “The Eucharist is the Sacrament of Love. It signifies love, it produces love!”

While his parents and brother were at St. John’s Chapel for the Easter Vigil, Ochs’ grandmother, who introduced him to Catholicism as a child and sparked his interest in the faith, could not make the trip from Ohio after all. Joyce Ochs was injured, but told him that she would be there in spirit “and I could definitely feel that.”

TASTING ETERNAL LIFE
Hope was a main theme of the homily given by Father James Pankiewicz, assistant chaplain at St. John’s Catholic Newman Center, before Msgr. Ketcham administered the sacraments of initiation.

“Because the stone has been removed and the tomb is empty, you and I can have hope — hope that our life has meaning and value,” he said. “We are not destined to remain in this world forever, but to reign eternally in the splendor of heaven. Would that be possible were it not for the death and glorious resurrection of our Lord, the firstborn of the dead?”

There is no pointless suffering in Catholic Christianity, he reminded them, because when Christians suffer they are uniting their hardships with the Lord.

“Because the stone has been removed and the tomb is empty, we can go about our daily lives with joy and inner peace. We do not walk alone, but are accompanied by our risen Lord and countless angels and saints,” Father Pankiewicz said.

“Because the stone has been removed and the tomb is empty, we know that our brothers and sisters who about to be baptized and confirmed here this evening will taste the beginnings of eternal life,” he said. “St. Paul reminds us that all the baptized are incorporated into the death and resurrection of Christ. Their souls are forever marked by our Lord’s saving passion and the Father will see the face of the Son whenever he looks upon those about to rise from the sacred waters.”