St. Mary’s Cathedral in need of repairs starting this summer 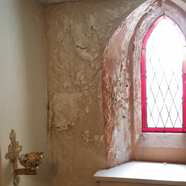 Photo Caption: Evidence of water damage is clearly visible around this window at St. Mary’s Cathedral in Peoria.

Nearing its 125th birthday and showing signs of age, St. Mary’s Cathedral in Peoria was due for a thorough exam. The results are in and have spurred caregivers of the mother church of the Diocese of Peoria to action.

“We knew there were problems,” said Msgr. Stanley Deptula, cathedral rector, in announcing a series of repairs expected to begin this summer. “You see the water damage on the walls.”

During last month’s snow melt, for example, “water was just pouring in again” and buckets had to be strategically placed throughout the sanctuary.

Mindful of both present and future generations, Bishop Daniel R. Jenky, CSC, called for an extensive study of cathedral maintenance needs. For eight weeks, contractors representing various specialties examined the historic edifice — which was dedicated on May 15, 1889.

“It’s time for intervention in order to prevent a major deterioration, which would be a bigger problem,” said Deacon Bob Sondag, vice chancellor, who is part of a committee overseeing the study.

“Moisture has become the enemy for the cathedral,” Deacon Sondag added. “We have significant moisture penetration of the stone walls. That has to be stopped.”

But Bishop Jenky wants to go beyond “Band-Aid” repairs, envisioning a “50-year fix” to ensure the cathedral and surrounding properties are stable and sound for his successors.

The former cathedral hall, now serving as a soup kitchen operated by the Missionaries of Charity, “is collapsing and inefficient,” he said. “Our community needs that soup kitchen as a corporal work of mercy for the church,” said Msgr. Deptula.

The cathedral roof is the original slate from Archbishop Spalding’s era.
“It’s amazing it has lasted 125 years,” said Msgr. Deptula. “We know that at some point within 50 years — maybe in five or 10 years — that roof is not going to make it. So we need to be prepared for that.”

Both Msgr. Deptula and Deacon Sondag emphasized plans under consideration are for maintenance, not remodeling or interior beautification. There should be no interruption of services, though visitors may notice exterior scaffolding. Eventually, after future phases, the cathedral interior will need to be repainted.

Msgr. Deptula reported that the cathedral is about to have a new sound system installed, made necessary by damage caused by a lightning strike. It should be ready for Holy Week.

There is also hope that St. Mary’s — which was the parish church of Venerable Archbishop Fulton J. Sheen as a boy — might be the site for future beatification-related ceremonies. While the cathedral’s long-term repairs might not be accomplished by that time, “at least the (presiding) cardinal won’t have a bucket of water fall on his head,” said Msgr. Deptula.

A St. Mary’s Cathedral Endowment Fund is available for those wishing to contribute to the repairs of the cathedral now or by remembering the cathedral in their will. For more information, call the cathedral parish at (309) 682-5823.