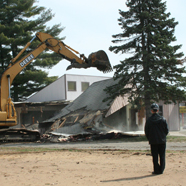 Photo Caption: Father David Whiteside, pastor of Immaculate Conception Parish, Manito, stands close to the church as it is razed April 5. Parishioners have raised $1.45 million toward a new church and parish hall.

MANITO — It took just 23 minutes for Immaculate Conception Church here to be reduced to rubble last Saturday and a dream of more than 30 years to become a reality for the parish’s 95 families.

With the 42-year-old structure gone, construction can begin on a new church that is not only beautiful but “worthy of our faith,” said Joan Mattson, as she watched the large John Deere excavator breaking the building’s walls and wooden beams into smaller pieces for removal later in the week.

If all goes well, they should be able to move into the new Immaculate Conception Church in eight months to a year, according to Father David Whiteside, pastor.

“I’m hoping construction will start by May 1, which is the feast of St. Joseph the Worker. He’s the patron saint of the project,” Father Whiteside told The Catholic Post as he stood inside the church, looking around for the last time.

Parishioners have also entrusted the project to their patroness. A large statue of Mary that sat in front of the church was moved to the top of a wooded hill that overlooks the building site.

“You can’t beat the Holy Family,” Father Whiteside said with a smile.

In addition to a new church, which will be able to seat about 250 people, the parish complex will include a large narthex or gathering space that will be equipped with audio so that it can serve as overflow for Easter and Christmas celebrations, weddings and funerals. A glass wall will separate the two spaces.

Parishioners and guests will be able to walk through the narthex into a parish hall that can accommodate religious education classes, in addition to large parish functions. Making those functions possible will be a large, well-equipped kitchen.

The cost of construction and all the furnishings is estimated at $1.8 million. Through donations, pledges and fundraisers, the building fund has generated $1.45 million to date.

ROOM FOR GROWTH
The original design by architect Bradley P. Hoffman of Loves Park was expanded on the advice of diocesan officials, Father Whiteside explained. “They wanted to make sure we had plenty of room for growth.”

They are working hard to make sure that’s the only thing that grows, however. Costs are being kept down by using a general contractor, Rick Bell Construction Co. of Heyworth, said Linda Kalhammer, a member of the building committee.

“He’s been really good at helping us pick subcontractors,” she said. “That way we can use a lot of local parishioners that have a lot of talent and can do these things and are willing to work with us.”

One of them is Brian DeSutter, who took the old church down for free. His grandfather was a trustee when it was built, according to Kathy Collins, who has been on the building committee since 1980. She said the church was completed in 1972 and by 1978 parish officials contacted Bishop Edward O’Rourke to say that it was already inadequate for their needs.

Like many churches constructed in the 1970s, Immaculate Conception was essentially a large hall with the altar tucked into one corner. The furnace room doubled as the confessional and the priests — and brides — would walk to the altar from the tiny kitchen.

Bishop Daniel E. Jenky, CSC, made that walk himself last year. When he got to the altar he said, “I’ve been looking at your church. It has a good 20 . . . minutes left in it,” Father Whiteside told The Post.

The last Mass in the building was on Aug. 15, 2013, the Solemnity of the Assumption of Mary. While they wait in joyful hope for their dream to come true, parishioners are coming together for Mass each Saturday at 6 p.m. at Trinity Lutheran Church in Manito.

“They gave us a room for a sacristy and a room for a confessional. They’re allowing us to pray the rosary in their church before our Mass every week. It’s truly amazing how God has been providing for us,” Father Whiteside said.

He’s looking forward to being able to extend that care to others when the new Immaculate Conception Church is built.

“I have a feeling this parish is going to be more than a parish,” Father Whiteside said. “I think it’s almost going to be a shrine that attracts people.”