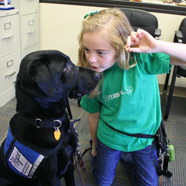 Photo Caption: Kellsey McGuire demonstrates the training that make her and Jasper, a 2-year-old Lab mix, such a winning team.

ROCK ISLAND — Bringing your best friend to school every day might be called a bonus. When that best friend can save your life, however, he’s called a hero.

That’s what Jasper, a black Lab mix, is for Kellsey McGuire, a second-grader at Jordan Catholic School. They joined Brianne Barr’s class in February.

Diagnosed with epilepsy when she was 18 months old, Kellsey has complex partial seizures and can stop breathing during these episodes. Jasper, a Disability Assistance Dog, is trained to sense when these are about to happen and get help.

“We call him our furry angel,” said Brandi McGuire, Kellsey’s mother. “He’s alerted us four times since we’ve had him — we’ve had him for 10 weeks. Two times she actually had seizures and two times he must have sensed something that wasn’t right.”

Because he can detect trouble as much as 10 minutes prior to a seizure, Jasper once alerted McGuire and when everything seemed fine she returned to bed. One of the signs that Kellsey is having a seizure is that she will open her eyes at night.

“I went to check on Kellsey and she was having a seizure,” she told The Catholic Post.

Jasper is also able to brace the slender 8-year-old. That’s important because sometimes the medications can make Kellsey dizzy, according to McGuire.

“They have a strong bond. It’s pretty amazing to see how they interact with each other and how close they are,” Barr said during a recent visit to Jordan Catholic School. “His life is dedicated to Kellsey and you can see how much he loves her and cares about her.”

Seizure response dogs will only alert if they have a bond with someone, McGuire explained.

“He knows every single inch of her and he knows when something’s not right,” she said, adding that he wouldn’t be able to perform the same service for anybody else.

A CALMING EFFECT
While Kellsey is in class, Jasper lays in a kennel next to her desk. He’s not resting, however.

“He’s always working. He’s always on the job,” Barr said. “He always has his eyes on her. If she gets up to walk across the classroom, his eyes are weaving in and out, constantly on her. He never leaves her side.”

That extends to church. Jasper accompanies Kellsey to St. Pius X Church in Rock Island for school Masses and to St. Ambrose in Milan with her family on the weekend. She is the youngest of Brandi and Colin McGuire’s four children.

When Kellsey made her first reconciliation, Jasper was at her side.

“Anxiety causes seizures, but she wasn’t nervous at all,” McGuire said. “She would just reach down and pet Jasper. I think if he hadn’t been with her that would have been a night she would have had a seizure.”

McGuire is already anticipating a white First Communion dress with black dog hair on it.

“When I’m at home he runs free. He’s just a puppy. He plays with his toys like a normal, ordinary dog,” Kellsey told The Post.

What makes that even more remarkable is that Jasper is a rescue dog. Kellsey explained that someone abandoned him.

“They didn’t want to take care of him. They left him out there,” she said. “He had mange. He was sad.”

Now that they’ve rescued each other they’re both happy.

“We had no idea he was going to boost her confidence so much,” Brandi McGuire said. “She’s very shy, but she answers questions in school now.”

“They have been a great addition to our classroom,” Barr said. “Everyone loves having them both.”

“He sure is going to be smart when he leaves here,” one of Kellsey’s classmates volunteered.

GROUP RAISES AWARENESS ABOUT EPILEPSY
Because epilepsy is a disease that many people don’t understand, Brandi and Colin McGuire founded ribbonsforkellsey inc. in November 2011. The organization is dedicated to increasing awareness and HOPE — Helping Other People with Epilepsy in the Quad Cities and surrounding communities.

In addition to educating the community and supporting people with epilepsy, ribbonsforkellsey inc. provides seizure safety pillows and scholarships. To find out more about the organization, visit ribbonsforkellsey.weebly.com or follow Ribbons for Kellsey on Facebook.