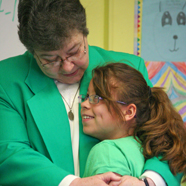 EAST MOLINE — Four Benedictine Sisters from St. Mary Monastery in Rock Island went back to the classroom recently, but instead of cracking books they offered a living lesson in vocations to the students at Our Lady of Grace Catholic Academy.

Providing those lessons were Sister Mary Jane Wallace, 85; Sister Rosemary Becker, 84; Sister Margaret Murphy, 78; and Sister Mary Core, 65. Their visit to the third- and fourth-graders came at the end of the first-ever National Catholic Sisters Week and was part of a new curriculum developed by Sister Stefanie MacDonald, OSB, the preschool teacher at Our Lady of Grace, and Susan Flansburg, communications director for the Rock Island Benedictine community.

“I’ve always had sort of a dream of getting a really good vocation-type program going for elementary schools. They are few and far between,” Sister Stefanie told The Catholic Post. “There’s all kinds of stuff for high school students and there’s some stuff for junior high, but for little kids there’s not much and what you find is OK, but. . . .”

When it was announced that National Catholic Sisters Week would be celebrated March 8-14, she decided it was a good starting point to look at what Sisters do and have done. She started working with Flansburg in the middle of January to develop something for each grade, starting with little storybooks for the preschool and kindergarten that were written by Flansburg and illustrated by teaching assistant Michelle Sierra.

Other projects had the fifth- and sixth-graders look at other religious communities in the upper Mississippi Valley, while the seventh- and eighth-graders wrote essays about Sisters who are making an impact in the United States today, such as Sister Helen Prejean.

In the case of the third- and fourth-graders, the Sisters came to them. Before the visit, the students received short stories about how each of the four women had made or are making a difference in the local community and had questions ready for them.

LIVELY DIALOGUE
Shy at first, the children soon became curious and the dialogue between them and their guests took on a life of its own.

How did Sister Mary Jane, a retired kindergarten teacher, feel about working with a little boy who had no arms? Was she afraid?

“Yes, I was very frightened. I didn’t think I could do it. I thought it should be another teacher who was trained in doing that,” she told them, adding that ultimately the experience taught her to accept the gifts she had and not take them for granted. “I try to help others to realize that also.”

Does she still keep in contact with her former student?

“Through prayer,” said Sister Mary Jane. “I pray for all my students.”
“Did you like to teach third grade,” one student asked Sister Margaret, who taught in Catholic schools for 50 years and now serves as a tutor and spiritual director.

“I loved teaching third grade because you know what? All of your imagination comes out. It just hits you in the face,” she said with a smile. “Do each one of you have a talent and a gift? You’re getting there! Good for you!”

Sister Mary’s current ministry as director of youth ministry at St. Maria Goretti in Coal Valley and Mary, Our Lady of Peace in Orion drew many questions, too, especially her trips to Treat House in Davenport with student volunteers. It was named Treat House because when the children there finished their homework they got a treat.

Disappointed murmurings could be heard when the students at Our Lady of Grace learned they had to be in high school before they could volunteer. “You contact me when you’re a little older and I’ll be glad to take you,” Sister Mary promised them.

Eventually the dialogue led one of the students to ask her, “Why did you become a Sister?”

“That’s what God wanted me to do and I felt that very strongly, that Jesus was saying, ‘I have a place for you and I have a work for you to do.’ I prayed and listened,” she said.

“Are you glad you became a Sister,” the student wanted to know.

“I sure am. I’m very happy,” Sister Mary assured her.

“I think that was the seeds of vocation right there,” Sister Mary Jane said afterward. “But we need more time to just sit and talk with these young people because their minds are very ripe.”

If Sister Stefanie has her way that will happen.

“The teachers are going to give us feedback so we can tweak,” she said. “I hope to offer this to all the schools in the Quad Cities for National Catholic Sisters Week next year.”