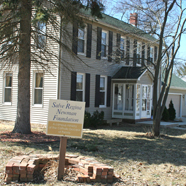 EDITOR’S NOTE: This is the fifth in a series profiling Catholic campus ministry at colleges located within the borders of the Diocese of Peoria.

EUREKA — If everything had gone according to plan, students from the Salve Regina Newman Center at Eureka College and St. Francis of Assisi Newman Center at Western Illinois University would have spent their spring break helping the victims of the tornado that hit Moore, Okla., last May. That all changed on Nov. 17, 2013.

“We have to switch gears this year,” Father Eugene Radosevich remembers saying after an EF4 tornado traveled 34.5 miles in Tazewell and Woodford counties, leaving millions of dollars of damage in East Peoria, Pekin and nearby Washington, among other central Illinois communities.

“Sometimes we have to go a long way to say, to play and to pray ‘I love you’ with my neighbor. This year we didn’t have to go so far,” the chaplain and director of the Salve Regina Newman Center told The Catholic Post a few days before the spring break mission experience started on March 8.

HISTORY OF SERVICE
Students from Salve Regina have collaborated with their counterparts from Macomb for several years because their spring breaks coincide. They went to Lake Charles, La., in 2009, and New Orleans in 2010, to help in the Gulf Coast’s continuing recovery from Hurricanes Katrina (August 2005), Rita (September 2005), Gustav and Ike (September 2008); Huntsville, Ala., in 2011; and Joplin, Mo., in 2012. Last year they went to Harrisburg and Galatia in southern Illinois to assist with ongoing tornado relief efforts.

While they have worked with Habitat for Humanity or AmeriCorps on occasion, this year Father Radosevich went through Bethany Community Church in Washington, which has been coordinating volunteers since last fall’s storm.

They were sent to work with local contractors to clear debris so construction could proceed uninterrupted. In one case that meant hauling 2 feet of snow and straw out of the basement of a home, using a ladder because there were no stairs.

The students also served at Threads, Hope and Love, which has a mission of “opening our hearts and hands to clothe those in need and help those in crisis.”

“Threads, Hope and Love will be there for the tornado victims in the future and that’s a great thing,” Father Radosevich said.

Eureka College, which was on break at the time, allowed the 14 students to use vacant dorm rooms, while the adult volunteers, including Sister Janice Keenan, OSF, director, and Leo Quinn, campus minister from the St. Francis of Assisi Newman Center, stayed in the college’s guest house. Transportation was made possible with a minibus loaned to them by Eureka College.

Making sure they had breakfast after Mass each morning and a hot meal when they returned in the evenings were Susan Redman and Sister Janice.

ONE BY ONE
Father Radosevich said the mission trips are an important component of Newman ministry, which seeks “to create a culture of life and love that puts our theology into action and concretely serves the neighbor in love of our God.”

He called Salve Regina, which is located in a two-story house across the street from Vennum-Binkley Hall, the “western extension” of the Eureka College campus. Because of the smaller number of students — about 700, with 123 Catholics — much of what he does is “confession ministry.”

“You go after the one and you’re happy when you get the one that you really can convert,” Father Radosevich said, noting that he has tried to provide Bible studies and good spiritual reading for the students, in addition to the sacraments. “Sometimes they come in and grab (books) off my shelves to give to other students and I say, ‘Fine!'”

To give the young adults space and time to relax together, Father Radosevich also built a fire pit in the backyard for socials when the weather is nice. Parishioners from St. Luke — where he serves as pastor — add a homey touch each Thursday by providing a meal after the 5:30 p.m. Mass in the center’s cozy chapel.

Because they share a priest, students and parishioners also share a Mass schedule, with weekday and Sunday Masses at the Newman Center open to the people from St. Luke.

The Salve Regina Newman Center became the first diocese-sponsored Catholic campus ministry at Eureka College in 2002, with Father Gary Caster as the first chaplain and Beth McMurray (now Sister Mariam Caritas of the Sisters of Life) as campus minister. Father Radosevich has served there since 2008.

From the Chaplain/Director
“Newman ministry is important to create a culture of life and love that puts our theology into action and concretely serves the neighbor in love of our God.”