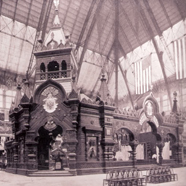 Photo Caption: The original St. Casimir Church in Streator was originally part of a Russian exhibit at the Chicago World’s Fair in 1893. This photo is part of the exhibit at The Musems of the Diocese of Peoria.

Museums display treasures, but visitors to the current exhibit at the Museums of the Diocese of Peoria will leave realizing they are part of the richness on display.

The ethnic fabric of the Diocese of Peoria is called to mind in “O God, Let All the Nations Praise You,” a tribute to the historically ethnic parishes in the diocese. The exhibit at the Spalding Pastoral Center in Peoria may be viewed until June 15.

“As soon as (visitors) realize their ethnicity is here, they immediately own it,” said Sister Lea Stefancova, FSJB, a diocesan archivist and one of the museum’s coordinators. “It’s something special, and they’ve made a connection.”

The display takes visitors back to when many parishes were founded along ethnic or national lines, including German, Irish, Belgian, Italian, Slovakian, Lithuanian, Mexican and Polish. Peoria’s Lebanese Maronite-rite parish, St. Sharbel, is also featured.

While there were dozens of ethnic parishes established early in diocesan history during various immigration waves, the exhibit narrows them down to 10 representative faith communities. Some, like Sts. Peter and Paul, Westville (Lithuanian) have passed into history. Most others now have diverse membership.

“Each had a special time when the ethnicity was really important,” said Sister Lea. “And that is what we wanted to highlight — how it was at that time when the parish was 100- percent Lithuanian, or German, etc.”

EXHIBIT IN FORM OF A CHURCH
The parishes happily loaned the museum artifacts to share their stories. The exhibit area is arranged to resemble a church interior, and visitors first see a holy water font from the original St. Patrick Church of Bloomington, representing Irish churches.

Along the walls are items such as a framed 1929 marriage certificate in Polish for Leon Krolak and Julia Galatka, members of St. Hyacinth in LaSalle. There are large images of stained glass windows from Holy Rosary, LaSalle (Italian) and St. Joseph, Peoria (German).

Instead of pews, there are panels — each picturing and portraying parish stories such as that of Our Lady of Guadalupe Parish in Silvis, founded for those of Mexican descent and whose first church was a railroad boxcar. There are accounts of larger-than-life personalities such as Father John Baptist Culemans, founding pastor of Sacred Heart in Moline, serving the spiritual needs of the large Belgian immigrant population.

“Father Culemans was there for 37 years,” said Sister Emmanuel Barth, FSJB, who helped research the exhibit. His story tells how he was a pilot and also founded a newspaper to serve the area Belgians.

SPECIAL FEATURES INCLUDE RECIPES
Visitors won’t leave empty-handed. On each panel is a container of cards for the taking, picturing the ethnic church and a related recipe on the back. There is Polish paczki (doughnuts), Slovakian kapustove halusky (noodles and cabbage), and Italian biscotti, to cite just three examples.

While many items on display are decades and even centuries old — including a priestly stole believed to have been worn by 17th century French explorer Father Jacques Marquette and a Slovak prayer book from the former St. Stephen’s Parish, Streator — there is one modern touch that ties it all together. A video screen slideshow captures five centuries of ethnic history in the region in seven minutes, ending with the Tha Huong refugee resettlement from Vietnam in the 1970s.

The concept for the ethnic churches exhibit came when the diocesan archivists — also including Sister Ann Gill, FSJB — were studying a photograph of the first St. Casimir Church in Streator. The church was originally a gift from a Russian czar to the 1893 World’s Fair Columbian Exhibition in Chicago. It was later moved to Streator where for decades the unusual edifice “was a head-turning point in the city,” said Sister Lea.

The photo, part of the museum display, stirred a question: “Why are there so many different ethnic churches?” The initial answer was found in the inviting and welcoming tone set by the diocese’s founding bishop, Archbishop John Lancaster Spalding.

“Other bishops in the country were kind of afraid of immigrants,” said Sister Lea, “but Bishop Spalding said let the other nationalities come, realizing they are all enriching in their own way to the church and country.” He tried to place pastors with the new parishes who could speak their native languages.

Meanwhile, Archbishop Joseph Schlarman, the diocese’s third bishop, was an expert on Mexican history and welcomed those coming during times of persecution in that land.

The Museums of the Diocese of Peoria include a permanent exhibit dedicated to Archbishop Fulton J. Sheen and a second space for temporary exhibits. The museum is open Monday through Friday and there is no admission fee. To schedule a group tour or for more information, call (309) 671-1550 or visit the museum website.