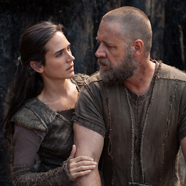 Photo Caption: Jennifer Connelly and Russell Crowe star in a scene from the movie “Noah.” The Catholic News Service classification is A-III — adults.

NEW YORK (CNS) — It’s not every day that you get to make a biblical epic. “Noah,” which debuted in theaters March 28, could be just such a movie, provided people go to see it.

“One of the biggest challenges is that everybody comes to the movie with their own expectations of what they think the story is and what they know the story to be. And I think some of those expectations can actually distance them from the story that exists in Genesis,” said Ari Handel, who co-wrote the script with director Darren Aronofsky.

“So I think a big challenge for us was to break away from those expectations, to knock people back a step, to look at the story fresh, and grapple with the questions that are inherent in the text. That’s what we really wanted to do,” Handel said.

Handel spoke to Catholic News Service prior to a March 26 red-carpet screening of “Noah” in New York.

“And of course, you come up against some issues where people have an expectation of what it’s going to be, and they’re fearful that you might not be treating it with respect. But fortunately, when people see the film and they realize what we’ve done, they realize that we’re very respectful, and we’ve took all of what we were doing very seriously and took the text very seriously,” he added.

Thanks to computer-generated effects, moviemakers don’t have to use Jell-O to part the waters as they did for 1956’s “The Ten Commandments,” which still gets regular airplay — usually on Holy Saturday — on ABC.

“I think that’s the reason it’s been so long since a biblical epic has been brought to the screen is that back 50 years ago labor and actors and sets were so cheap — or, not so cheap but less expensive,” said Scott Franklin, Aronofsky’s “Noah” co-producer.

“They didn’t have the ability of CGI,” the Hollywood term for computer-generated effects, Franklin added. “It’s only in the last five or 10 years where we’ve been able to supplement that cost of, unfortunately, what was inexpensive labor to make those giant, grand scenes come to life and be able to replace them with the scope of CGI, but I think that it’s really a result of all the films of this size that are being made today with CGI: animals, water, set extensions or whatnot.”

“Noah,” it must be said, features a lot of animals and water. The boilerplate term “No animals were harmed in the making of this motion picture,” typically found in the closing credits of films, is missing from this one, because every “animal” was digitally inserted after the fact.

“We didn’t worry about the marketing and the selling, and who it’s for and all. We worried about making this story the right story and making it a powerful and effective piece of cinema.”

It may be just as well, since a hoped-for meeting by “Noah” star Russell Crowe, a Catholic, and others from the moviemaking team with Pope Francis at the Vatican in March never came to pass, according to Vatican officials.

In the view of John Mulderig, CNS’ assistant director for media reviews, “Noah” isn’t exactly a high-water mark in biblical cinema, giving the movie a classification of A-III — adults — for “much stylized violence with minimal gore, an off-screen encounter that may be premarital, distant partial nudity and some mild sensuality.”

“The movie’s dramatic deviations from its inspired source material mean that young viewers would be better directed — initially at least — to more literal-minded adaptations, rather than this very free variation on a theme,” he wrote.