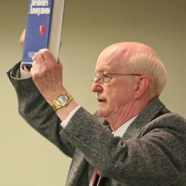 Photo Caption: Speaker Ted Wolgamot told the deacons pornography is a powerful disease that “doesn’t just affect the brain, it affects the soul.”

Addiction to pornography isn’t something anyone wants to talk about, much less admit they struggle with. The topic comes up so often in pastoral ministry, however, that the permanent deacons of the Diocese of Peoria tackled the issue at their annual convocation this month.

“The thing I see with pornography and dealing with people with addiction is the absolute shame — more than any other addictions I’ve worked with people on — and the demeaning of the human condition,” said Msgr. Tim Nolan, episcopal vicar for the permanent diaconate. “It’s kind of hard to say, ‘I’m a child of God’ when we think we’re a piece of garbage.'”

“It’s one of the greatest challenges, not only to the church but to the culture,” Bishop Daniel R. Jenky, CSC, told the deacons and their wives, who gathered at the Spalding Pastoral Center in Peoria. Noting that women as well as men are addicted to pornography, he called it “an equal opportunity addiction and an equal opportunity sin.”

“I’m glad you are going to think about it, study about it, pray about it,” Bishop Jenky said. “It’s enslaving. And what this does to children — how messed up they are and how it will mess up their future sexual life is simply enormous.”

Msgr. Nolan said it’s important to understand that “every kid that has a computer in his bedroom is sleeping in an adult bookstore. I tell parents that and they don’t believe me.”

Statistics provided by Dr. Ted Wolgamot, who recently retired after 26 years of working as a psychologist and counselor — the last 12 at the Antioch Group in Peoria, show that Msgr. Nolan is on track.

What makes this all the more seductive is that it leads people to believe they’re not hurting anyone because it’s all in their head — just a game, he said. The fear is that sex will become more casual and trivialized if this is allowed to continue.

Wolgamot agreed with Bishop Jenky that this is an equal opportunity problem, calling it “a human issue.” In his practice, however, there were more men than women seeking treatment, usually after being caught by their spouses.

But dealing with addiction as a “chronic brain disease” is only one part of the equation, according to Wolgamot.

A SOUL DISEASE
“Contrary to what the scientific world wants to hear, it is also a soul disease,” he said. “It doesn’t just affect the brain, it affects the soul of the human being and if people don’t get help on a spiritual dimension, most people don’t get well because the disease is just that powerful.”

Priests have told him this is the number one sin they’re hearing in confession now. Permanent deacons don’t hear confessions but they are involved in spiritual direction and family ministry and this is where they can have an impact, he said.

“My hope is we’ll start getting people to understand this is not something they’re going to be able to stop all on their own,” Wolgamot told the deacons and their wives. “It doesn’t mean they’re a bad person. It just means they’ve got a very bad problem, but we know so much more about it than we’ve ever known before. There’s help out there for it. Please use the help that’s available.”