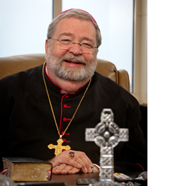 Photo Caption: Bishop Daniel R. Jenky, CSC, has asked all Catholics of the Diocese to “open your hearts to live joyfully and generously” and pray for guidance before making their pledge to the ADA.

To illustrate how gifts to the Diocese of Peoria’s Annual Diocesan Appeal come back to parishes and families in many different ways, Msgr. Charles Beebe gets personal.

“Throughout the years of my preaching the Annual Diocesan Appeal I have heard one objection given by many parishioners,” says Msgr. Beebe, pastor of St. Joseph, Roanoke, and St. John, Benson. In a video to be shown at all Masses in the diocese on appeal weekend, April 5-6, Msgr. Beebe names it:

“What has the diocese done for me lately?”

“My answer has always been, for better or for worse, the diocese educated me, and sent me to you,” he explains in the video. “And that usually provokes a smile.”

As appeal weekend nears, the diocese hopes the eight-minute video and other promotional efforts provide additional examples — and inspiration — to those considering their pledge.

The appeal is the major source of revenue for the ministries and agencies of the Diocese of Peoria, including vocational development, Catholic schools and religious education, social outreach, pastoral care, and more. This year’s goal is $5,885,000.

The theme for the 2014 Annual Diocesan Appeal is drawn from a phrase used by Pope Francis: “Open Your Hearts to Live Joyfully and Generously.”

“Our Holy Father, Pope Francis, has really called the entire church to remember we exist to go outside, to go to the highways and byways to announce Jesus Christ to everyone we meet,” says Bishop Daniel R. Jenky, CSC, in a message opening the appeal video. “That’s true for this Diocese of Peoria, and it’s true for every parish and school and ministry,” he continued. We exist to announce the good news.”

Acknowledging that “these are challenging days,” Bishop Jenky said “the work of Christ requires sacrifice from all of us.”

Parishes have been assigned individual goals for the Annual Diocesan Appeal. Funds they collect beyond that are returned for their own needs and projects. But what is forwarded to the diocese also comes back to local parishes, schools, and families, say appeal organizers.

“INVALUABLE” SUPPORT
Among those featured in the appeal video is Msgr. Philip Halfacre, pastor of St. Michael the Archangel Parish in Streator, who called diocesan support “invaluable.”

“When people come to Mass on Sundays, or when they interact with the parish, they see me, they see the office staff, etc.,” said Msgr. Halfacre. “What they probably don’t realize is that there are people working behind the scenes in the diocese who are an incredible, invaluable resource to me so that I can have the gifts I need, the information I need to somehow serve them better.”

While thousands are grateful for the role Cursillo has played in drawing them closer to Christ, Deacon Jim Heatwole of Morton used his segment in the video to express gratitude that the movement in the Diocese of Peoria is ecumenical.

“Had it not been that way, I don’t know what would have been able to bring me and my family into the Catholic Church,” said Deacon Heatwole, who serves at St. Mark Parish in Peoria.

How the diocese supports religious education in parishes was brought home by three catechists, including two serving as regional directors of religious education — Alan Anderson, serving both LaSalle-Ottawa and Bloomington-Lincoln, and Jackie Scott, serving the Champaign-Danville region. They emphasized the importance of educating both children and adults in the faith.

And Sister Marina Ramirez Mesa, HSCP, who serves in Hispanic ministry, tells of the mother of a 9-year-old daughter who recently came for help. The family was living in the basement of a house with no electricity.
“She had no job,” recalled Sister Marina. “She had no money. She was low on food. Barely any furniture. She was desperate.”

“We were able to meet nearly all her needs and now she feels safe and happy,” said Sister Marina.

The appeal is planned and coordinated by the diocesan Office of Development and Stewardship and is overseen by a 20-priest advisory board.