Cardinal George is hospitalized; being treated for dehydration 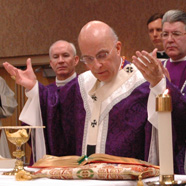 According to a March 18 press release issued by the Chicago Archdiocese, he was hospitalized after doctors discovered during a routine checkup that he was dehydrated.

The release said he started experiencing flu-like symptoms a week earlier while keeping to his usual work schedule and appointments. He went to Loyola March 14 for a regular checkup on his chemotherapy treatment.

After his doctors discussed his symptoms, they decided Cardinal George would remain at the hospital until he recovered. He was being treated with an antibiotic and was receiving intravenous fluids.

The release said Cardinal George expected to be released later in the week. “He asks that people continue to pray for him as he continues to keep people in his prayers,” it said.

On March 7, the archdiocese announced Cardinal George would undergo a new round of chemotherapy to address “current signs of activity of cancer cells surrounding his right kidney.”

The cardinal’s medical team recommended the course of treatment based on the results of several recent tests.

Cardinal George, 77, was diagnosed with urothelial cancer in August 2012 and underwent chemotherapy at that time. The cancer, dormant for well over a year, is still confined to the area of his right kidney.

“After extensive testing, scans, biopsies and diagnosis, it was agreed that the best course of action is for the cardinal to enter into a regimen of chemotherapy, with drugs more aggressive than those used in the first round but for a more limited duration initially,” the archdiocese said.