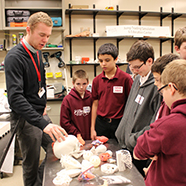 Parents trying to enhance the science, technology, engineering and math at St. Jude Catholic School in Peoria may have helped students everywhere, thanks to a new collaboration with the Jump Trading Simulation and Education Center at OSF Saint Francis Medical Center.

“Our thought is that you would be designing things that help people,” Dr. John Vozenilek, chief medical officer at Jump, told the students during their first visit March 16. “When you think about medicine, medicine is all about helping people through your mind, through your heart and through your skills.”

That means in addition to allowing the middle school students to engage on an academic level, the program will ask the students to consider the sociological implications of the problem and the role their faith and compassion play, according to Father Patrick Henehan, pastor.

“What we’re hoping to do is inspire our students to be even better in math because they can see a real-world application for why they want to do better in math and to help other people and use the gifts they have,” he told The Catholic Post. “That’s why it’s exciting for us.”

Winnie Pratt, principal, said each team of five students would receive a problem to solve using what they are learning about engineering, as well as the math, science, social studies and religion they are studying at St. Jude. Then they will be asked to design a prosthetic limb and develop a story about the person who might be affected by it.

While they will return to Jump throughout the semester, many of their classes with Urbain will take place at St. Jude. Also working with the teams are Toni Mullens, their math and technology teacher, and Martha Bogdanowicz, their science teacher.

The program will culminate with a presentation at the Jump Center in May.

NICE PLACE TO START
Paul Pribaz, executive director for innovation at Jump and the parent of three St. Jude students, said the goal is to give students experiences that are meaningful.

“A lot of the research shows that one-off visits are exciting, but not that impactful. So the idea that we do something that’s a little more longitudinal is really important,” he told The Catholic Post. “We’re using St. Jude as a pilot to see what a longitudinal project might look like.”

The research also indicates that sixth and seventh grades are a good time to intervene and “generate excitement” around science, engineering, math and technology, Pribaz said.

“There’s still time for these kids to change gears, to decide to work a little harder, put the pedal to the metal,” he explained. “Certainly you can make a change (in high school) and be very successful, but in terms of putting the impact on the place where it can make the most difference, this is why we thought middle school was a nice place to start.”

Pribaz added that students from Peoria Notre Dame High School have been working as summer interns at Jump and there is some discussion of expanding that activity, but “one thing at a time,” he said with a smile.

“Innovation” and “compassion” are words that OSF HealthCare and Jump use all the time and that’s what makes this program such a good fit for St. Jude, Father Henehan said.

“We know, in the modern world, we’re trying to teach our students to effect the world and effect it for Christ ultimately,” he said. “It allows us to be on the cutting edge of the academic world, but also be where we are always called to be, which is rooted in Christ.”