Hoopeston parish to debut play about Sheen on Friday, March 21 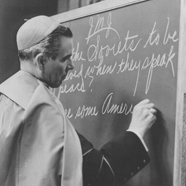 Photo Caption: Venerable Archbishop Fulton J. Sheen is pictured writing on a chalkboard during his television show, “Life is Worth Living.”

HOOPESTON — This winter’s cold and snow provided the perfect environment for the fertile mind of Tom Sweeney to create a new dramatic interpretation of the life and teachings of Venerable Archbishop Fulton J. Sheen.

And at 7 p.m. on Friday, March 21, 10 members of St. Anthony Parish here will bring Sweeney’s 45-minute play, “Chalk,” to life in a debut performance at the church hall, located at Third and Lincoln streets. All are invited to attend free of charge.

“I wrote most of ‘Chalk’ in January, when Hoopeston was snowed in,” said Sweeney, who taught dramatic writing at Homewood-Flossmoor High School for 34 years and now lives in rural Hoopeston. “I live on a farm and we were snowbound.”

Sweeney has long been familiar with Archbishop Sheen, the media pioneer and author whose cause for sainthood is being promoted by the Diocese of Peoria. (See related story.) His uncle and godfather is Merle Fulton, a cousin to Sheen who lived in the sainthood candidate’s native El Paso on the border of Woodford and McLean counties.

“I guess I have a back fence introduction to Sheen — and it is quite a garden,” he told The Catholic Post.

To further harvest that garden, Sweeney last fall ordered seven of Sheen’s books. After reading them he began to craft a story — he calls it a parable — using imagined characters to take audiences through Sheen’s life.

“His life journey illustrates a belief that ‘life is worth living,’ and that we do find happiness in spiritual obedience, even if we face considerable disquiet,” Sweeney writes in a prologue that opens the show.

WRITTEN FOR PARISH SETTINGS
The play is presented as a dramatic reading by a cast of 10 parishioners, including a host/narrator and various housekeepers. Set pieces are minimal. There are no costumes. The focal point is a chalkboard that slides from scene to scene. Sheen used a chalkboard in his television show, “Life is Worth Living.”

Each of the nine scenes is framed in the passage of Lent, and together cover a 50-year time span in Sheen’s life.

“It is tailored to be presented by parishioners who do not memorize,” said Sweeney. While he incorporates quotes from Sheen’s writing, they are crafted into a play that includes the storytelling elements of irony, foreshadowing, and contrast.

“You may not admire several characters,” says the host in the prologue. “They are imagined as contemporary Pharisees. They are at dramatic odds with Sheen. Evil does exist. So does goodness.”

“I wanted the parish in Hoopeston to hear what wonderful things (Sheen) had to say,” said Sweeney, who frequently showed Father Patrick O’Neal, administrator of St. Anthony, his work as it progressed. The writer has yet to formally copyright “Chalk” as he continues to research what is permissible when quoting from various source texts.

The debut performance of “Chalk” comes on a Lenten Friday night that begins with a simple supper served by the parish youth club at 5:30 p.m. Stations of the Cross take place in the church at 6:30 p.m..

Reflecting that Sheen’s television and radio audiences were not limited to Catholics, invitations have been sent to all churches in the region. Hoopeston is located about 30 miles north of Danville.

Desserts will be served following the performance. For more information, contact Tom Sweeney at (217) 283-6858.