‘Mary of Nazareth’ to be shown in Kewanee on March 9 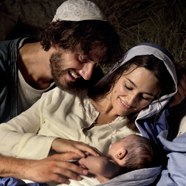 Photo Caption: A scene from the film “Mary of Nazareth,” which will be brought to the Wanee Theater in Kewanee by the Altar and Rosary Society of St. John Parish in Galva.

KEWANEE — “Mary of Nazareth,” a feature film about the Blessed Mother, will return to central Illinois on Sunday, March 9, for a screening at the Wanee Theater, 106 S. Main St. The Altar and Rosary Society of St. John Parish in Galva is sponsoring the 1 p.m. viewing on both sides of the twin theater.

Shot in English, “Mary of Nazareth” was filmed in Europe under the direction of Giacomo Campiotti. The role of Mary is played by German actress Alissa Jung, who is said to “vividly capture the essence of Mary’s profound faith and trust in God amidst the great mysteries that she lived with,” as well as her “compassionate humanity and concern for others.”

While the film is not rated, information on the film’s website indicates that it would probably receive a PG rating. Viewing is not recommended for very young children because some scenes, such as the murder of the innocents and the crucifixion, might be too intense.

Ignatius Press owns the North American rights for “Mary of Nazareth” and is distributing the film in partnership with Carmel Communications.

The movie was very popular when it was shown in December in Peoria, where an additional screening had to be scheduled. The proceeds from those screenings benefited the new Women’s Care Center.

More information about the movie itself is available at maryfilm.com.