Joy Allen to retire after 23 years as Central Catholic principal 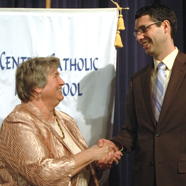 Photo Caption: Joy Allen, principal of Central Catholic High School in Bloomington since 1991, will be succeeded this summer by Sean Foster, associate principal.

BLOOMINGTON — Saying her heart is filled with pride in as well as gratitude and love for the Bloomington Central Catholic High School community, Joy Allen has announced her decision to retire after 23 years as principal effective June 30.

At a news conference on March 6 in the school’s auditorium, Sean Foster — associate principal and a faculty member for five years at Central Catholic — was introduced as incoming principal.

“As I step down as your principal it is with mixed emotions,” said Allen, her voice breaking on several occasions as she addressed an auditorium filled with students, area pastors, diocesan officials, school trustees, parents and faculty in addition to media.

Saying she looks forward to spending more time with family, including two granddaughters, Allen lauded Foster as “a solid man, a faith-filled man, and a person who will bring new leadership and also innovation, new ideas, and just a great future to Central Catholic High School.”

ZEAL, PASSION, ACCOMPLISHMENTS
Foster, in turn, called Allen his “mentor” and thanked her for her many contributions and accomplishments at the school.

“One cannot simply replace another after 23 years of service,” said Foster. “What I do hope to do is to serve Central Catholic with as much zeal and passion as Mrs. Allen has for the past 23 years.”

Seated with Allen and Foster on the stage were Msgr. James Kruse, vicar general of the Diocese of Peoria who represented Bishop Daniel R. Jenky, CSC; Patricia Gibson, chancellor of the Diocese of Peoria; and Msgr. Gerald Ward, president of the Central Catholic High School Pastor’s Board and pastor of St. Patrick Church of Merna in Bloomington and St. Mary Parish, Downs.

Msgr. Ward expressed the appreciation of the pastors ? present and past ? of the school’s six supporting parishes for Allen’s dedication to Central Catholic and example of faith in Christ. That dedication resulted in her receiving a papal honor, the Benemerenti Medal, in the fall of 2012.

“Her willingness to share her gifts and her talents has allowed this school community to grow and to meet our challenges that we have faced over these many years.”

Enrollment was at 213 students when Allen arrived in 1991 and now stands at 346. Under her leadership, a new school campus was built on Airport Road, opening its doors in 2003 and expanding its athletic facilities in ensuing years.

Allen instituted the “Living the Faith” program for works of mercy service hours necessary for graduation; began the Dream House Raffle with a school parent in 1993 for tuition scholarships (the fund now stands are more than $1 million); and broadened curriculum to better serve all academic levels at the school.

In an interview with The Catholic Post, Allen said that among her many memories three stand out:

— accompanying seniors to Washington, D.C., each January for the national March for Life;

— the state championships won by athletic teams and friendships with coaches such as Bobby Moews and Debbie Coffman, and

— observing so many students utilizing the school’s chapel. “We embrace praying,” she said. “I hope students take that with them when they leave to campus to get through life’s challenges.”

CONTINUITY, INNOVATION, PROFESSIONALISM, FAITH
Foster, who is a junior class theology teacher and chaired the school’s theology department, said being faithful to the school’s Catholic mission is his primary goal. He hopes to continue to build “strong, meaningful relationships.”

Msgr. Kruse, who expressed the diocese’s gratitude for the “fantastic job” done by Allen, said that Foster was chosen as her successor because he brings continuity, innovation, professionalism and “more than anything, his example of Catholic faith.”

Msgr. Kruse pointed out that Foster was among a select few nationwide to be chosen for the Remick Leadership Program at the University of Notre Dame, designed to prepare Catholic school leaders for service as principals.

Allen told those present that her “heart is full.”

“It’s full of pride for what we’ve accomplished together,” she said. “It’s full of gratitude for the 23 years of learning and for your support. It’s full of love,” she said, pausing and her voice breaking with emotion, “because once a Saint, always a Saint.”