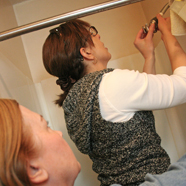 Photo Caption: Anne Hess and Mary Starcevich work on installing a new showerhead in one of the 65 rooms at Nazareth House, the diocesan retreat center in Henry, on Feb. 15.

HENRY — Water isn’t the only thing raining down in the shower stalls at Nazareth House these days — although new showerheads recently installed by volunteers from St. Bernard Parish in Bushnell make that easier.

“That spirit of service is going to bring graces to all the souls that come here. It’s going to touch their hearts,” said Sister Sonia Mancuello, SCTJM, coordinator of Nazareth House. “I’m sure they’re going to receive all the love that you put into putting the showerheads in for them. Thank you so much.”

The 65 rooms of the diocesan retreat center received the new showerheads, which can be mounted or hand held, at the suggestion of Father Dominic Vitaliano, administrator of St. Bernard in Bushnell and St. Augustine Parish in St. Augustine. He bought them with his own money and invited his parishioners to make the two-hour drive to install them.

“I just came to the realization that we need to support the retreat center here and do something that would help them,” said the priest, who returned to the Diocese of Peoria last summer after 12 years of service as an Air Force chaplain. “It’s just a little improvement, but it’s a big thing because it will make things better for the retreatants.”

Father Vitaliano said it was important for people to reach out beyond the boundaries of the parish “to do good things” and he praised his parishioners for their hard work.

“They’re taking time out — they’ve worked all week long — to come here on a Saturday, to sacrifice their time,” he told The Catholic Post.

Don Pool of Blandinsville, who works at Lowe’s in Burlington, Iowa, gets one weekend off each month and used part of it to be at Nazareth House on Feb. 15. He brought his son Jake, 16, for the experience of serving others, learning how to install showerheads, and spending time together.

The work at Nazareth House was nothing new for Pool, who operated “Blessed Are the Poor” Renovations for four years. Through his business he helped people in need with projects at greatly reduced rates.
Another team consisted of Mary Starcevich and Anne Hess, who made quick work of replacing the showerheads in another wing of Nazareth House.

“It’s nice to get out of the house and do something for others when you could be snowbound,” Hess said with a smile.

Before the volunteers went their separate ways, they attended Mass in the retreat center’s chapel and shared lunch. During his homily, Father Vitaliano told the Servants of the Pierced Hearts of Jesus and Mary, the caretakers of Nazareth House, that he had good news and bad news for them.

“The good news is people are going to say, ‘These are great showers!'” he said. “The bad news is your water bill is going to go up.”