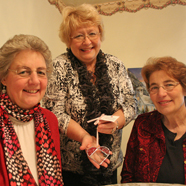 Photo Caption: Linda Mitton holds one of the stained glass heart suncatchers sold to raise money for clean water projects around the world. With her are Barb Brooks, left, and Therese Roman.

SILVIS — Providing clean water for people around the world is the goal of four women in the Quad Cities and they’re doing it one heart at a time.
Therese Roman, Barb Brooks, Linda Mitton and Kaye Miller have formed a stained glass ministry known as Hearts 4 H2O. Working throughout the year, they create 250 suncatchers made of red and clear glass in the shape of a heart and sell them for $10 each at an area church just before Valentine’s Day.

All of the proceeds — $2,500 each year — go toward building a well or supporting a clean water project in places where it will do the most good. Roman, a member of Our Lady of Guadalupe Parish in Silvis, said they buy the supplies with their own money or donations given to them for that express purpose.

Since 2011 they have made more than 1,000 hearts — 500 in the first year alone — enough to fill the hearts and water containers of people in four locations.

“And the love goes on,” Roman said.

CLEAN WATER IS KEY
Roman and Brooks, a member of St. Anne Parish in East Moline, are sisters. Roman used to teach with Mitton, a member of Christ the King Parish in Moline, at the former St. Mary School (now Our Lady of Grace Academy) in East Moline. Their friend, Kaye Miller, is a member of Peace Lutheran Church in Port Byron and serves as the group’s treasurer.

They got the idea from Kathy Heseman, a classmate at the former St. Anne School, who had been involved in this type of ministry in Urbandale, Iowa, since 2003. She suggested her friends start a “satellite” ministry in the Quad Cities and taught them the basics.

“Kathy said she thinks clean water is the key to a lot of people’s problems — that they don’t have clean water,” Brooks said, adding that they liked the idea of helping to rectify that situation.

“It takes a lot of patience,” Brooks explained. “We get better as we go.”

They have workshops in Miller’s basement and Roman’s basement and get together every two or three weeks to make certain they can meet their goal of 250 glass hearts by Valentine’s Day. While their workshops are quiet right now, they’ll get started again in May.

“They do make nice gifts,” Mitton said. “They seem to trickle out all year.”
Those who missed out on this year’s sale, which appropriately enough took place at Sacred Heart Church in Moline, shouldn’t despair.