Play explores if Adam and Eve went to marriage counseling 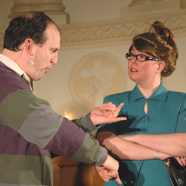 Photo Caption: Adam (Gary Wells) lists his complaints about Eve (Maria Romine) in a scene from “Adam and Eve Got to Marriage Counseling” performed at the diocesan Valentine Date Night.

Did you ever wonder in Adam and Eve’s marriage who really wore the “plants” in the family?

The world’s first married couple was shown to have struggles and needs that sounded both familiar and amusing in a comic play presented to 132 couples attending a diocese-sponsored Valentine Date Night Feb. 15 at the Cornerstone Building in Peoria. The evening followed the annual Marriage Mass at St. Mary’s Cathedral.

“Adam and Eve Go to Marriage Counseling” was the title of the production performed by three members of Theater of the Word, Inc., a St. Louis-based troupe that evangelizes through comedy and drama.

“Believe me, we need it,” said Eve, portrayed by Maria Romine. She laments that her husband rarely talks to her and “doesn’t hear a word I say.” Wise-cracking Adam (Gary Wells) complains that Eve is never home because of her volunteer commitments.

At one point, Adam jokingly agrees that “marriage and crucifixion are very similar” when the counselor (Dave Treadway) urges them to strive for the perfect love modeled by Christ on the cross.

Billed as the only comedy based on Pope John Paul II’s “Theology of the Body” teaching, the play has its serious moments as the counselor — revealed at the play’s end as another historic figure — guides Adam and Eve through areas including pornography on the Internet, the purpose of sex, and divorce.

Theater of the Word was founded by artistic director Kevin O’Brien, who hosts a series on EWTN. It offers productions on a variety of faith-centered topics including the life of a parish priest, vocations, and lives of saints such as the apostles Paul and John. For more information, visit
Theater of the Word.