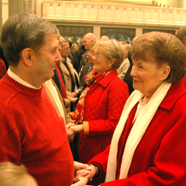 Photo Caption: Married couples from around the diocese renewed their vows at the annual Marriage Mass on Feb. 15. In the foreground are Les and Marian Brown of St. Thomas the Apostle Parish, Peoria Heights.

After leading hundreds of couples from around the Diocese of Peoria in a renewal of their marriage vows the night after Valentine’s Day, Bishop Daniel R. Jenky, CSC, invited them “to do something I think you’ve had some practice at — kiss one another.”

And those gathered at St. Mary’s Cathedral in Peoria for the annual Marriage Mass were more than happy to follow the direction of their bishop.

“I think they could hear those kisses all the way to Chicago!” laughed the bishop.

Moments earlier, the bishop called the married couples — ranging from newlyweds to Bob and Marcella Lindley of St. Matthew Parish, Farmington, married 66 years — “our heroes” and “living examples of the love and fidelity of Almighty God.”

“Marriage builds up the Body of Christ which is the church and teaches the human family how to live, how to grow, how to change, how to forgive, and most especially how to love,” said the bishop in his homily. The love present in the cathedral that evening was palpable, he told them, adding that “it builds up my faith.”

The 132 couples who continued on to a “Valentine Date Night” following the Mass would hear a similar message — and challenge.

“I am inspired by so many people in this diocese who put Christ first in their marriage,” said Craig Dyke, director of the diocesan Office of Evangelization and Family Life, which coordinated the evening. The program at the Cornerstone Building included dinner, prizes, and a performance by a troupe from the Theater of the Word. (See related story.)

Dyke said that in a culture that has “lost our way” regarding the definition of marriage and its permanence, “we are called to be that witness of a love that comes through Christ, with Christ, and by his grace. Thank you for being those couples.”

As the evening ended, he led the couples in an exercise called “60 Seconds to Energize Your Marriage,” in which the couples faced one another and shared a minute-long moment of prayerful and emotional intimacy in the crowded ballroom.

“Praying with each other is one of the most, if not the most, intimate things we can do,” said Dyke.

DIFFERENCES COME TOGETHER
In his homily, Bishop Jenky described how “opposites” are found throughout reality — light and darkness, matter and antimatter, true and false, heaven and hell, etc. The differences between the sexes, he said, are not “accidents” but rather “fundamental to the workings of human nature.”

By God’s design, the different genders come together in the unity of marriage.

“God established the faithful and fruitful love between a man and a woman as a sacrament — an outward sign instituted by Christ that truly makes the love of God present in this world,” said the bishop.

At present, however, “the elites of our culture seem to be more fascinated by androgyny than by these most basic human realities,” said Bishop Jenky. “Our mass entertainment, the media and talk shows — and increasingly even the unelected courts — seem to prefer a kind of pretend world that tries to deny that complexity and difference between a man and a woman that comes from the intentional design of the Creator.”

He concluded with a major challenge to married couples, saying that by their vocation they are called to “try to be a bit like God.”

Like God, he said, married couples should be self-giving, be ready to forgive and forget “over and over again,” and base their lives on peace, gentleness, kindness, humility, friendship and patience.

With God’s help, those united in Christian marriage should also “never give up on the one they have promised to love . . . as long as life lasts.”
Present at the Marriage Mass were members of the board of directors of the Archbishop Fulton John Sheen Foundation who were meeting in Peoria that weekend to assist the diocese in promoting Venerable Archbishop Sheen’s cause for canonization. Concelebrating the Mass with Bishop Jenky were Father Andrew Apostoli, CFR, vice postulator for the cause, and Father Andrew Small, OMI, national director of the Pontifical Mission Societies.