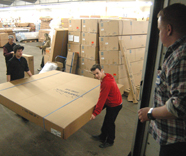 Photo Caption: Volunteers load a mattress and other furnishings into a truck for one of 40 initial families in the “House in a Box” program sponsored by the Society of St. Vincent de Paul to assist tornado victims.

Recovering from losing everything in a disaster is a marathon, not a sprint.

Fortunately for the most vulnerable victims of the Nov. 17 tornadoes in the Diocese of Peoria, a program offered by the Society of St. Vincent de Paul in partnership with other agencies is offering a fresh start.

Forty of the most needy families — pre-identified by case managers — came to the Catholic Charities tornado relief center in Peoria last Thursday to pick up new household furnishings through the Society’s “House in a Box” program.

The tangible items they loaded into pick-up trucks and transport vans included beds, dressers, sofas, dining tables and chairs, pots and pans, dishes, and towels. But they drove away with something more, said Tom Pelger, president of the Society of St. Vincent de Paul’s Peoria Council.

“It’s a great step in their road to recovery,” said Pelger, who oversees Society efforts throughout the Diocese of Peoria. “It gives them hope for the future.”

He noted that recipients are typically those who were renters with no insurance and already living at the poverty line or just above when the twisters hit Tazewell County, especially the community of Washington. They may have found another apartment to rent, but the furnishings are sparse, mixed, and likely well used.

“This allows them to get back to a much more regular living condition,” said Pelger.

While House in a Box began the pick-up phase in Peoria on Feb. 20, it will soon also benefit the neediest families recovering from tornadoes that devastated the communities of Gifford, near Champaign, and Brookport in downstate Massac County.

COLLABORATIVE EFFORT
The Society of St. Vincent de Paul is a Catholic lay organization whose members grow spiritually by offering person-to-person service to the needy and suffering. House in a Box is a national program of the Society that supported families after disasters including hurricanes Katrina and Sandy, the Oklahoma tornadoes, and the plant explosion in West, Texas.

To finance the program locally, Pelger obtained $30,000 from the Society’s national disaster fund and $40,000 from other Vincentian conferences, councils, and local donations. Partners in the effort are the American Red Cross, Salvation Army, and the Jewish Federation. Catholic Charities has made plentiful space available in the former SHARE warehouse now serving as a tornado relief distribution center, and is helping staff the St. Vincent de Paul Help Line.

While many of the items being distributed were purchased, Tempur-Pedic North America donated mattresses used in the program.

“No one organization can deal with something like this,” Pelger said of disaster relief. “It forces you to pull up out of your organizational silos, which is hard. The breadth of participation in this program is a great example of how our community has pulled together to support the tornado survivors.”

The Society of St. Vincent de Paul has been there from the outset, passing out gift cards for food and gas in the days after the tornado and gathering information on families in need in conjunction with the Coordinated Assistance Network.

The long-term nature of disaster assistance has resulted in two members from local Vincentian conferences — Mark Kwiat of St. Philomena Parish, Peoria, and Pam Green of St. Thomas the Apostle Parish, Peoria Heights — engaging in nearly full-time work. While they are being paid a modest wage from the Society’s disaster fund, Vincentians’ motivation to assist those in need comes from their faith.

“All of our people who do this work are called to service,” said Pelger. “They’re called to live their faith. Certainly Pope Francis is proving to be a wonderful, inspiring, and challenging voice for all of us to remember that’s what our Catholic faith is all about.”