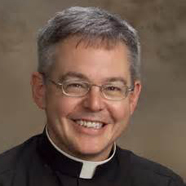 PONTIAC — Msgr. Stuart Swetland will return to the Diocese of Peoria Feb. 23-25 to help Catholics in the Pontiac vicariate spiritually prepare for the season of Lent with a three-day mission at St. Mary Church here.

Msgr. Swetland is a priest of the diocese and former chaplain and director of St. John’s Catholic Newman Center at the University of Illinois. He now serves as vice president for Catholic identity and mission at Mount St. Mary’s University and director of homiletics at Mount St. Mary’s Seminary, both in Emmitsburg, Md. He also hosts the daily call-in show “Ask Your Father” on EWTN Radio, Ave Maria Radio, and Relevant Radio, and is a guest commentator on the EWTN Television Network.

The mission opens Sunday evening with a conference from 6:30 to 7:30 p.m. led by Msgr. Swetland on the topic of “Faith.” Exposition of the Blessed Sacrament will follow the talk.

The Blessed Sacrament will remain exposed at the main altar of St. Mary Church until Tuesday’s conclusion of the mission, except during Mass and the talks. The public is invited to adoration at any time.

The Tuesday schedule is similar, including Mass at 6:30 p.m. with the final conference exploring the topic of “Charity.”

The parish’s regularly scheduled 7 a.m. Mass will not be celebrated on Monday and Tuesday.

Msgr. Swetland was ordained in 1991 and has an undergraduate degree in physics from the U.S. Naval Academy. He has a doctorate degree from the Pontifical Lateran University and studied at the John Paul II Institute for Studies on Marriage and Family in Washington, D.C. In the Diocese of Peoria, he also served as administrative assistant to Bishop John J. Myers, as pastor of St. Peter Parish in Peoria, and as chaplain and director of the Bradley University Newman Center.