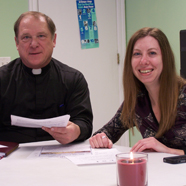 ROCK ISLAND — Over the years, the Catholic, Jewish and Muslim communities in the Quad Cities have come a long way toward understanding one another better through a series of interfaith dialogues.
Now they’re going the extra mile — several thousand extra miles — to explore their spiritual heritage in the Holy Land.

Father Mike Schaab, pastor of St. Pius X Parish, and Rabbi Tamar Grimm of Congregation Beth Israel at the Tri City Jewish Center, both in Rock Island, will lead the tour, called the Interfaith Israel Experience, from July 6 to 15. A very full itinerary will take the pilgrims to sites that are sacred to both faith traditions.

“I don’t think either side got everything they could have if they were going alone, but the purpose of it is not only a pilgrimage to the shrines of the Holy Land,” Father Schaab said. “It’s also meant to help Christians understand their relationships with the Jewish community, recognize our shared roots and grow in an appreciation of one another’s interests in the Holy Land.”

For Catholics those roots will take them to the places that tell of the life of Christ and his ministry, which focuses in large part around the Sea of Galilee, he explained. The group will visit Nazareth, Bethlehem and the Church of the Nativity, the Garden of Gethsemane, the Via Dolorosa, and the Church of the Holy Sepulcher.

Rabbi Grimm said Jerusalem is “the center of our world” and she looks forward to sharing that with people during the Interfaith Israel Experience.

“It’s the place where the Temple stood. The remaining wall that’s there, the Western Wall, is still a sacred place to a lot of Jewish people,” she told The Post.

The trip will also include visits to Masada, the Golan Heights, a kibbutz, and Yad Vashem, a memorial to those who died in the Holocaust.

EVERYTHING SHARED
While some things may appeal more to one group or the other on any given day, “it is our intention to share everything,” according to Father Schaab.

“There may be occasions when, after viewing something, we’ll have to explain to each other why that was important,” he acknowledged, saying that he and Rabbi Grimm were prepared for that.

Both religious leaders have been to the Holy Land before. Father Schaab was there in 1979 and Rabbi Grimm lived in Israel for two years during her rabbinical studies.

Rabbi Grimm said she hopes people come away with a sense of connection — to the history, to the places and to the people.

“There’s a flourishing of Jewish culture that exists in Israel that doesn’t exist anywhere else on earth,” she explained. “I want people to enjoy it, to have a positive experience, to feel safe and to see it’s not the war zone they see in newspapers. There are a lot of beautiful landscapes and people who are warm and kind and care about the same things we care about.”

The interfaith dialogues have included Imam Saad Baig and members of the Islamic Center of the Quad Cities, but the Muslims will be unable to take part in the July pilgrimage because it coincides with Ramadan. The strenuous nature of travel and the fasting required during all daylight hours at that time would be problematic for followers of Islam, Father Schaab said, noting that he hoped all three groups could make the trip together in the future.

The cost for the Interfaith Israel Experience, which is being arranged through Israel Tour Connection, is $4,295 for the land and air package or $2,345 for the land package alone. Those prices are only guaranteed through Feb. 21.

For more information or an application, contact Father Schaab or Barb Roedel at (309) 793-7373 or parishoffice@stpiusri.org.