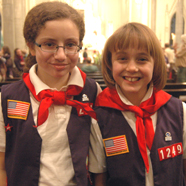 There were new faces, and uniforms, at this year’s diocesan Scout Mass on Feb. 9.

With a mission to “build women of integrity through service to God, family, community and country,” American Heritage Girls formed when the Girl Scouts of the United States of America was seen as moving away from religious commitment. The rapidly growing organization offers Christ-centered character development to girls ages 5 to 18.

“In general, it’s more faith-based programs,” said Darren Greca, coordinator for AHG Troop IL2415 that has met twice monthly at St. Mary School since last June. The troop already has 40 members, and is supported by the local Knights of Columbus council said Greca, who is the father of four daughters.

A second Catholic troop of 19 girls formed at St. Jude Parish in October, and two more Catholic troops are expected in the area soon.

American Heritage Girls progress through five levels, including Pathfinder (ages 5-6), Tenderheart (6-9), Explorer (9-12), Pioneer (12-14) and Patriot (14-18). Greca said “getting outdoors” is especially emphasized, noting his troop just returned from a winter campout where “we lost electricity and got the full experience.”

“We’re still very new and trying to get our feet underneath us,” said Lisa Brabec, a leader with Troop IL1249, which meets at St. Jude Church, calling it “exciting” to be part of the diocesan Mass.