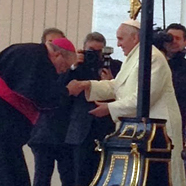 Photo Caption: Bishop Daniel R. Jenky, CSC, greets Pope Francis after the Jan. 29 general audience at St. Peter’s Square at the Vatican. The bishop is in Rome with a delegation from the University of Notre Dame.

VATICAN CITY (CNS) — Catholic universities must give “uncompromising” and “unambiguous” witness to church teaching and defend themselves from all efforts to dilute their Catholic identity, Pope Francis said.

Catholic universities, “by their very nature, are committed to demonstrating the harmony of faith and reason and the relevance of the Christian message for a full and authentically human life,” he said in an audience with members of the board of trustees of the University of Notre Dame — including Bishop Daniel R. Jenky, CSC, of Peoria.

(The full text of Pope Francis’ remarks can be found on the blog site of Bishop Jenky.)

The pope met Jan. 30 with some 130 people representing the Indiana-based Catholic university, who were in Rome for the inauguration of the university’s new Rome center.

Speaking in Italian, Pope Francis praised the university, saying it “has made an outstanding contribution to the church in your country through its commitment to the religious education of the young and to serious scholarship inspired by confidence in the harmony of faith and reason in the pursuit of truth and virtue.”

He said the institution’s original vision, guided by its religious founders of the Congregation of Holy Cross, “remains, in the changed circumstances of the 21st century, central to the university’s distinctive identity and its service to the church and American society.”

Catholic identity and missionary discipleship are critical, the pope said, and need to be evident in the way Catholics live and in the workings of all Catholic institutions.

Catholic universities play a special role in being faithful missionaries of the Gospel because of their commitment to showing the compatibility of faith and reason, and showing how the Christian message offers people a fuller, more authentic human life, he said.

“Essential in this regard is the uncompromising witness of Catholic universities to the church’s moral teaching, and the defense of her freedom, precisely in and through her institutions, to uphold that teaching as authoritatively proclaimed by the magisterium of her pastors,” he said.

“It is my hope that the University of Notre Dame will continue to offer unambiguous testimony to this aspect of its foundational Catholic identity, especially in the face of efforts, from whatever quarter, to dilute that indispensable witness,” he said.

The pope then looked up from his prepared text and told his audience in Italian, “This is important: Your own identity — as it was intended from the beginning — to defend it, preserve it, carry it forward,” he said.

Though the pope made no references to any controversies, the University of Notre Dame had reignited a heated debate about maintaining the Catholic identity of U.S. Catholic institutions of higher education when it invited President Barack Obama to deliver the commencement address and receive an honorary law degree in 2009.

Several U.S. bishops and other critics said Obama’s support of legal abortion and embryonic stem-cell research made him an inappropriate choice to be commencement speaker at a Catholic university.

More recently, a Notre Dame professor, Gary Gutting, wrote an op-ed piece in the New York Times Jan. 23 calling on Pope Francis to rethink the church’s absolute opposition to abortion. In many cases, abortions are immoral, the Catholic professor of philosophy said, but “this by no means implies that most abortions actually performed are immoral,” particularly in cases of pregnancy resulting from rape or when the life of the mother is in danger.

A group of university alumni have also expressed concern about the institution’s decision to comply with the federal Affordable Care Act, which requires employer-provided health insurance to include coverage of contraceptives, sterilizations and other types of birth control opponents say can induce an abortion, while the university continues its lawsuit against the mandate.

In the homily at Mass in the chapel of his residence that morning, Pope Francis focused on the importance of humility and fidelity to the church and its teaching.

“The first fruit of baptism is to make you belong to the church, to the people of God,” he said, according to Vatican Radio.

That’s why it is “absurd” to imagine a Christian who loves Christ, but doesn’t love, listen to or stay close to his church, he said.

People who follow the Gospel their own way without the church are living “a fantasy,” he said, “an absurd dichotomy.”

Humility is needed to feel part of the church, he said, because a person who isn’t humble “will hear what she or he likes” and not what God and the church really say.

“We receive the Gospel message as a gift and we have to pass it on as a gift, but not as something that is ours; what we give is a gift received” from Jesus, the pope said.

People need to be faithful “to the church, to its teaching, to the Creed, to doctrine, to safeguard doctrine” as they seek to live it and hand it on to others, he said.

Christians don’t “become masters of the Gospel, masters of received doctrine, to use it as we like,” he said.