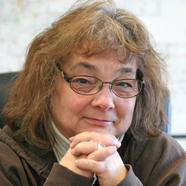 Photo Caption: Shirley Faux of St. Joseph Parish, Pekin, says the vows she professed with the Secular Order of Discalced Carmelites deepens her relationship with God.

She wasn’t looking for more of what the world offered, however.
Faux was seeking a more structured prayer life and a deeper relationship with God and she found both through the Secular Order of Discalced Carmelites. In a ceremony last fall, she took the rare step of professing vows.

At the same ceremony, held in the chapel of St. Thomas the Apostle Church in Peoria Heights, June Kriesel of Mattoon was clothed with the scapular and started her formal study of the saints and the Rule of St. Albert Constitutions and Statutes. This formation takes place within and is guided by the Secular Discalced Carmelite Community of Mary, Mother of the Blessed Sacrament.

Faux, who is the formation director for the community, said Kriesel would be eligible to make a temporary promise in two years. If she goes on, there would be another three years of study and formation before she could make a definitive promise.

“That’s normally the farthest that anyone goes,” Faux told The Catholic Post. “Once you’re definitive promised you are fully in the Carmelite community. The vows are only for some people that want to take it farther.”

Faux did, so after three years of being definitive promised she applied to Father John Grennon, OCD, the delegate of the Washington Province of the Immaculate Heart of Mary to the Secular Order of Discalced Carmelites. With his permission she began another year of prayer and discernment.

“The vow is more personal between you and God. It doesn’t change your status,” Faux explained. “It’s just a deeper personal relationship with God. I just felt God was calling me for it.”

STRONGER FAITH
Born and raised in Chicago, Faux attended St. Ignatius School and St. Scholastica High School. She went on to study psychology and advertising for a couple years at Northwestern University and took courses in business administration at Illinois Central College after moving to Peoria in 1978.

She moved to Pekin in 1989 and is now an active member of St. Joseph Church.

“I do a little bit of everything, Faux said modestly. She has been a member of the choir and was a cantor and continues to serve as an extraordinary minister of holy Communion, lector, sacristan and lector.

The mother of a grown son and daughter, she may look familiar to those who have visited the Sheen Pastoral Center and its successor, the Spalding Pastoral Center in Peoria. Faux was a receptionist in both buildings at one time.

Faux had explored the third orders of several religious communities before learning about the Secular Discalced Carmelites. She liked knowing that they were considered part of the Carmelite community and shared in the rhythm of life with the friars and the nuns.

Their focus on prayer, especially for seminarians, priests and the souls in purgatory, was a strong attraction, as was the requirement to pray the morning and evening prayers of the Liturgy of Hours, and night prayer whenever possible. Meditation time is also required and members are encouraged to attend daily Mass and make one retreat a year, she added.

“It’s a vocation,” Faux said. “My faith has gotten stronger.”

Going to the monthly meetings for ongoing formation, socializing, fellowship and prayer is also important, she said. The Secular Discalced Carmelite Community of Mary, Mother of the Blessed Sacrament comes together on the second Saturday of the month from 11:30 a.m. to 2:30 p.m. at St. Thomas Church in Peoria Heights.

Visitors are welcome, including priests and deacons who are interested in Carmelite spirituality. For more information, call Faux at (309) 253-0238.