Shares story of God’s grace, healing after her abortion as teen 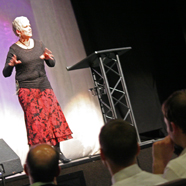 Photo Caption: Sheila Luck, keynote speaker at the Sanctity of Human Life Rally in Peoria, encouraged pro-life advocates to pledge that “I will do what I can, where I am, with the great I Am.”

Sheila Luck was 17 when she had an abortion. A scared high school senior, she didn’t think she had a choice.

It took 20 years for her to accept what she had done and after 38 years she is still healing, with the grace and love of God, she said.

Luck shared her story at the Sanctity of Human Life Rally in Peoria on Jan. 16 in an effort to assist the pro-life advocates in saving other scared young women and their babies from the suffering she knows is in store for them. Held at Riverside Community Church, the rally was sponsored by Central Illinois Right to Life.

In addition to Luck’s talk, the rally featured updates on the work being done by Central Illinois Right to Life, the Women’s Pregnancy Center and the new Women’s Care Center, all based in Peoria. Prior to the rally, an open house took place at the new Family Resources Center.

A consistent theme throughout the night was the power of prayer.

“What do we need most? Prayers, because this phone doesn’t ring often enough,” said Sondra McEnroe as she held up the cellphone that allows Central Illinois Right to Life to respond to women in crisis 24 hours a day. When she asked if people remembered the number, many were able to respond: (309) 645-8000.

“We also need prayers for those that call so we can get them to a pregnancy center,” she said, adding that not all of the women are open to the pro-life message. “We need more prayers so that we’re able to help them when they need the help and we need prayers for change, so we’re not needed as much.”

“This is a battle that is the Lord’s,” said Denise Bailey of the Women’s Pregnancy Center. “We can stand firm, we can take that position that we know is right and watch him claim the victory — and he will.”

LONG ROAD OF SUFFERING
Sheila Luck is an attorney and author who serves on the board of directors of Elizabeth Ministry International and Wisconsin Right to Life. She has been married for 30 years and is the mother of two grown daughters — each born on anniversary days related to her abortion.

For many years she thought that this was a cruel joke that God was playing on her.

“It wasn’t until a couple years ago that I discovered he was blessing me,” Luck said. “He was telling me that I was forgiven. It wasn’t a cruel joke. He blessed me with two beautiful daughters.”

When Luck discovered she was pregnant in high school, she didn’t want to tell her mother for fear she would be turned out of the house. She didn’t dare tell her friends because she thought their mothers wouldn’t let them hang out with her anymore. And what about college — could you live in the dorms if you were pregnant?

Telling Luck that her body was just “forming a nest,” her doctor handed her a brochure about abortion. She couldn’t get one in her native Wisconsin without parental consent, so she convinced a friend to drive her to another state where she could do it without their consent — and spent the next 20 years rationalizing why it wasn’t wrong.

She kept hearing a voice, however: “Sheila, what have you done? Your baby’s blood cries out to me from the ground.”

“It’s a long, long road of suffering for a woman when she realizes the truth about abortion,” Luck said. “Since Roe v Wade was decided in 1973, 43 percent of all women of childbearing age since then have had an abortion. That translates to every American family has been impacted by abortion whether you know it nor not.”

ON GOD’S SIDE
What she hoped the pro-life advocates would take away from her story is an understanding of the fear that drives a woman to an abortion clinic. She asked them to consider what they are doing to create a safe environment for the 17-year-olds in their church, neighborhoods and families who need to talk.

“Are we doing things in our churches that encourage teenagers to talk to each other about good, healthy choices in life? What are we doing to open doors to say, ‘We’re here to help’?” she said.

“Some of us have time. Some of us have money. Some of us have unique abilities. Some of us are comfortable speaking with people who feel they have no choice and explaining to them how they do have a choice,” Luck told them and encouraged them to adopt this prayer as a pledge: “I will do what I can, where I am, with the great I Am.”

“We are on God’s side. We are with him in this pro-life movement. He values life, we value life, and he will be there to help us do what we can, where we are, with whatever we have available to help us,” she said.