Diocese was well represented at national March for Life 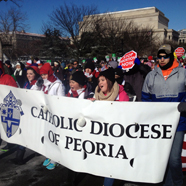 Photo Caption: Participants in a Diocese of Peoria sponsored pilgrimage to the March for Life carry a diocesan banner through the streets of Washington, D.C. on Jan. 22.

As Lydia Schirano walked with dozens of her classmates and tens of thousands of strangers from the National Mall to the steps of the U.S. Supreme Court on Jan. 22, she took little note of below-zero wind chill factors and new fallen snow.

“When you are there standing up for what you believe in along with that many people, the weather is the last thing on your mind,” the senior at Central Catholic High School in Bloomington told The Catholic Post upon her return from the annual March for Life in Washington, D.C.

“Every time I felt like complaining about the cold,” she added, “I just reminded myself who I am fighting for and I offered it up to all those babies who didn’t get a chance to voice their opinion.”

Her classmate Abigail Hartman put it succinctly: “Even though it was cold this year,” she said, “we were freezin’ for a reason.”

Schirano and Hartman were among hundreds of people from the Diocese of Peoria — mostly high school and college youth but also several priests, Sisters, seminarians and adult leaders — who traveled to the nation’s capital to take part in activities marking the anniversary of the U.S. Supreme Court decisions legalizing abortion.

They weren’t alone in dismissing the chill.

“You’re not thinking about how cold it is when you’re marching,” agreed Craig Dyke, who coordinated a diocese-sponsored bus of 55 pilgrims. “You’re more thinking, ‘Wow, this is awesome. We’re with hundreds of thousands of people who believe in the sanctity of life, who see the beauty of it, the joy of life. You forget about the cold.

“And then, when the march is over, you realize, ‘Oh my gosh, I’m freezing'” added Dyke, who serves as director of the diocesan Office of Evangelization and Family Life.

“AMAZING TO BE A PART OF”
Reasons for making the trip are both individual and collective.

“Ever since starting high school at Marquette I have wanted to go on the March for Life,” said Lauren Meyer, part of the Crusaders for Life group from Marquette Academy making her first trip. “It seemed like it would be something absolutely amazing to be a part of, and it definitely was. I also went because I wanted to stand up for what I believe in and deepen my faith.”

It can also change your life, as it did Alexa Massey’s a year ago.

“My experience last year made me want to bring a little piece of the march back home,” she explained to The Catholic Post. Massey became co-president of Peoria Notre Dame’s Teens for Life group, and plans to continue pro-life efforts in college and even hopes to open a non-profit organization providing help for mothers in need and their newborns.

“I think the march is something that everyone should attend at least once in their life,” said Massey, who encouraged her younger sister to accompany the group this year.

It was the fifth March for Life for Father Robert Lampitt, chaplain of The High School of Saint Thomas More in Champaign. He said the sacrifices of the students inspire him and “recharge my batteries and encourage me to keep up the fight for life.”

“The days we spend in D.C. will be with them the rest of their lives,” said Father Lampitt, “and it gives me the chills to think how they will not only share this experience with others, but especially their own children some day.”

Some of the pilgrims from our diocese have already begun sharing the moments that most moved them at the 2014 march.

LASTING MEMORIES
“Whenever I discuss the trip it’s hard for me to stop because it touches you in a way where you can truly only understand when you’ve done it yourself,” said John Haines, a senior at Marquette Academy who hopes to make the trip “every year of my life until the Roe vs. Wade decision is reversed or the law is changed.”

One moment from this year’s march that stood out for both Haines and Massey was seeing people break into tears during the march when they passed video boards with images from abortions. No one could understand “how a human being could be treated so unfairly,” Haines recalled.

“I was fighting back tears because it just breaks my heart to think that so many kids don’t get an option to live their lives,” added Massey. “It reaffirmed to me that what we are doing is making a difference.”

While some of the pilgrimages made stops at historic sites in the nation’s capital, it was the spiritual moments that left lasting impressions on many.
During the Youth Rally and Mass before the march in the Verizon Center, Tyler McCauley of St. Mary Parish, Kickapoo, came to the realization that sometime in his life he wants to adopt a child.

“It was weird because I’m only 16, and I recognize that it’s a big life decision to make so early, but I know that it’s something that I’m called to do,” said McCauley, who attends Brimfield High School.

When bad weather kept the diocesan and Peoria Notre Dame groups in their hotel the night before the march, an impromptu “youth rally” was planned in a conference room that became “a highlight of the trip for many of us,” said Dyke. Among those taking part were five diocesan priests present — Fathers Adam Stimpson, Tom Otto, Geoff Horton, Joseph Dondanville, and Scott Pothoff — as well as members of the Dominican Sisters of Mary, Mother of the Eucharist and the Servants of the Pierced Hearts of Jesus and Mary,

The evening included recitation of the rosary, confession, and several witness talks on the sanctity of human life.

Father Jacob Rose, chaplain of Marquette Academy, recalled the privilege of hearing confessions for three hours at a youth rally at the Patriot Center hosted by the Diocese of Arlington.

LOOKING FORWARD TO NEXT YEAR
Diocesan pilgrims are already looking ahead to next year’s march.

“I would absolutely encourage students and faculty to go in the future,” said Father Rose. It’s a great testament that the education in our Catholic schools stretches far beyond the walls of our school.”

“I would always suggest that anyone, especially other students, go to the March for Life,” said John Walker of The High School of Saint Thomas More. “Though it may be just as cold, that just makes a greater testament to the conviction of the pro-life movement.”

“I’d love to see five buses” sponsored by the diocese, he said.