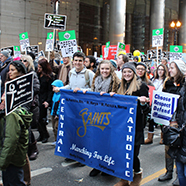 CHICAGO — More than 4,000 people cheered for the right to life in downtown Chicago on Jan. 18, and adding their voices were 73 students from Central Catholic High School in Bloomington. It was the first time the school had participated in March for Life Chicago and the students found it to be “pretty powerful.”

“What I’ve always taken away from this kind of pro-life movement is it’s not just your body, it’s someone else’s,” senior Maggie Knoll told The Catholic Post. “You can’t hear them and they can’t speak for themselves, so it’s our job to speak up for them.”

Also speaking for the unborn, the elderly and the vulnerable at March for Life Chicago 2015 were Archbishop Blase Cupich of Chicago, Katie Melody of Students for Life of Illinois, and Abby Johnson, a former Planned Parenthood employee who is now an outspoken pro-life advocate.

“When people see us marching, shoulder to shoulder, when they see us walking together for this cause they will see a people who want to accompany others. That’s the motivation,” Archbishop Cupich said as the event started at Federal Plaza. “It’s not about criticizing or judging or condemning. It’s about accompanying one another, because that’s what life is all about. . . . We want to make sure that everybody has a place at the table.”

Marching means we can’t sit still, he said, adding that there must also be an aspect of invitation when they do.

Noting that abortion has always been a reality for her and her friends, Melody said they had “come of age in a world where men and women who choose suicide and abortion are hailed as heroes.”

“All of us here today are survivors of the culture of death,” she said.
Melody learned how to go forward from her family and observing the self-surrendering love of her parents.

“When I was in high school, my dad told me, ‘Katie, if any of your friends ever becomes pregnant, tell her we’ll adopt her baby. Tell her we will take care of her and her child, whatever it takes for her to choose life,'” she said.

“In turn, I call on my generation to lead with this love in their hearts,” Melody told the crowd before her, many of them in high school and college. “I dream that we no longer survive the culture of death, but we thrive at building the culture of life.”

Johnson acknowledged the presence of protesters across the street from the James R. Thompson Center and said she was glad they were there, because “every time they hear a charitable truth from us it plants a seed. I’m here to tell you that no one is beyond conversion. . . . No one is beyond the power of God.”

She called abortion a human rights issue and said it was up to them to “declare justice for those unborn babies who are discarded like trash.”

Johnson said many had challenged her by asking if she was willing to adopt all the babies she was trying to save. Her response is succinct: “Bring ’em on!”

“The next time you’re talking to someone who is an abortion supporter and they say, ‘What are you gonna do with all these babies?’ you can look at them and say, ‘You just call Abby Johnson. She’ll take every single one of them.'”
Central Catholic senior Katie Clark found Johnson’s talk “amazing” and “a real testament to the whole pro-life movement.” She was also planning to go to the National March for Life in Washington, D.C., and said she wanted to participate in as many events like this as she could.

Father Peter Pilon, chaplain at Central Catholic, said that was his goal. He was looking for something he could do with the underclassmen, since seniors are typically the only ones able to go to the National March for Life. The Chicago trip involved 16 freshmen, 32 sophomores and 23 juniors.

March for Life Chicago 2015 took 11 months to plan and had 17 sponsoring organizations, including Illinois Right to Life, Students for Life of Illinois, the Archdiocese of Chicago and the Catholic Conference of Illinois.