Faith, hope give pro-lifers joy even at somber commemorations 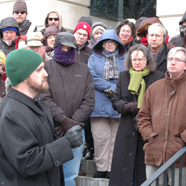 Photo Caption: Father Daniel Gifford, parochial vicar at Epiphany Parish in Normal, addresses a crowd on the steps of the old McLean County Courthouse in downtown Bloomington at noon on Wednesday, Jan. 22.

BLOOMINGTON — People who believe in and promote the sanctity of human life are not “bitter and angry people” but are most often joy-filled because of their abundant faith, hope and love.

That was just one observation of Father Dan Gifford as he addressed 50 pro-life proponents who huddled on the icy west steps of the old McLean County Courthouse at noon on Jan. 22 to prayerfully commemorate the somber occasion of the 41st anniversary of the U.S. Supreme Court decisions legalizing abortion. It was one of several observances in the Diocese of Peoria as tens of thousands gathered in Washington, D.C., for national March for Life activities.

How is joy possible even on a day that mourns the death of 55 million unborn children through legal abortion in our nation since 1973?

“We must remember hope — that bridge between faith and love,” said Father Gifford, parochial vicar of Epiphany Parish in Normal and guest speaker at the annual memorial service sponsored by McLean County Right to Life. Such faith-based hope “remembers that we have a God who from the greatest evil, death, brought the greatest good, resurrection.”

Thanking those who serve in crisis pregnancy centers and in post-abortion healing ministries, Father Gifford says hope is realized “in every child who is spared and in every woman who has begun to experience healing and hope.”

Father Gifford’s ten-minute reflection also challenged those who suppress the truth that abortion has negative effects on women.

“What breaks my heart most is when I hear abortion defended as a woman’s right,” he told those assembled. “The fact that so many have been deceived into defending something that is harmful to women.”

Quoting from Scripture — in which Daniel says “I will have no part in the death of this woman” (Daniel 13:46) — Father Gifford said we have responsibility to stand up in defense of women being harmed today, as well as for the voiceless, unborn children who both faith and science agree are unique human persons.

Father Gifford was introduced by Tom Shilgalis of McLean County Right to Life, who pointed out that the 55 million victims of abortion is about the total population of California and New York combined.

“It’s been a long time since 1973,” said Shilgalis. “We never thought we’d still be doing this, but God willing there will be an end to it before too long.”

The 15-minute gathering closed with the group praying the “Our Father.”