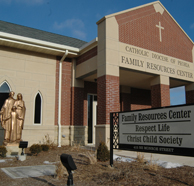 Whether they’re praying and walking in central Illinois or joining the March for Life in Washington, D.C., people from around the Diocese of Peoria will show their support for human life and call for an end to abortion in the days ahead.

This year marks the 41st anniversary of the Supreme Court decision that legalized abortion in the United States. It is estimated that 55 million children’s lives have been lost to abortion since Roe v. Wade was handed down on Jan. 22, 1973.

The first opportunity for prayer and witness comes this Thursday, Jan. 16, with the Sanctity of Human Life Rally at Riverside Community Church, 207 N.E. Monroe St., in Peoria. Sponsored by Central Illinois Right to Life, it will begin at 7 p.m. and feature Sheila Luck as the keynote speaker.

Prior to the rally, people are welcome to attend an open house at the new Family Resources Center, 415 N.E. Monroe St. Guests may explore the facility and its books and audiovisuals from 5:30 to 6:30 p.m.

On Sunday, Jan. 19, two buses sponsored by the Diocese of Peoria and Peoria Notre Dame High School will take 110 teens and adults from Galesburg, Hoopeston, Kickapoo, Normal, Mendota, Pekin, Peoria and Peterstown to Washington, D.C., for the annual Rally and March for Life, which will be held on Wednesday, Jan. 22. The pilgrimage includes participation in a youth rally at the Patriot Center as well as a visit to the Basilica of the National Shrine of the Immaculate Conception for Mass and a tour.

Stops are also planned at the Holocaust Museum, the Smithsonian and other historic sites.

The trip home features a stop at Mount St. Mary Seminary in Emmitsburg, Md., for a tour and dinner with seminarians from the Diocese of Peoria.

Those remaining in central Illinois will find memorial services or prayer vigils in Bloomington, Champaign, Galesburg and the Quad Cities.

BLOOMINGTON
A memorial service will be held at noon on Wednesday, Jan. 22, on the west steps of the old McLean County Courthouse, Center and Jefferson streets. The speaker for the event, which is sponsored by the McLean County Right to Life Committee, is Father Dan Gifford, parochial vicar of Epiphany Church in Normal.

CHAMPAIGN
An ecumenical memorial prayer vigil is planned for 7:30 p.m. on Wednesday, Jan. 22, at Three Hierarchs Greek Orthodox Church, 2010 Three Hierarchs Court (near Fox and Devonshire). The theme is “United in Love on Our Walk for Life” and the featured speaker will be Bishop Demetrios, chancellor of the Greek Orthodox Metropolis of Chicago.

Sponsoring churches include Holy Cross and St. Matthew in Champaign, and St. Patrick in Urbana.

GALESBURG
Grace Anglican Church, 151 E. Carl Sandburg Drive, will host Knox County Right to Life’s annual prayer service on Sunday, Jan. 26. It will begin at 6:30 p.m. and is open to people of all faiths.

The guest speaker will be Steve Brody, who was the executive director of Dubuque Right to Life from 2008 to 2012. His topic is “The Faces of Life in the Pro-Life Movement.”

A free-will offering will be received to support area women’s pregnancy centers.

QUAD CITIES
The Women’s Choice Center of the Quad Cities, 2711 Happy Joe Drive in Bettendorf, Iowa, will mark the 41st anniversary of the Roe v. Wade decision with a candlelight vigil at 7 p.m. on Wednesday, Jan. 22. A rosary will be prayed at 6:30 p.m. inside the center and more prayers will be offered on the sidewalk outside Planned Parenthood.

Refreshments will be served at the Women’s Choice Center after the event.

The vigil is open to anyone who wants to come together in “peaceful and prayerful reflection on the lives of both the women and babies who have died due to abortion.”