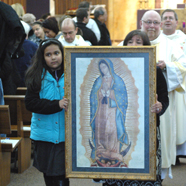 Photo Caption: Vanessa Almarez and Maria Serrano carry the image of Our Lady of Guadalupe to its place of enshrinement at Holy Family Church in Peoria the conclusion of the 11 a.m. Mass on Dec. 15.

The ethnic diversity evident in the pews of Holy Family Parish in Peoria is now also reflected in the church’s religious art.

During the 11 a.m. Mass on Sunday, Dec. 15, the second of eight religious representations of different ethnic backgrounds at Holy Family was enshrined with the blessing of an image of Our Lady of Guadalupe. The parish has longstanding ties with Mexico — including a sister relationship with a church in Tlacoachistlahuaca, and more recently with two Sisters of the Sacred Heart and of the Poor from Mexico now teaching at the school.

Six Mexican Sisters of the order were present for Sunday’s celebration, as were members of the Hispanic choir from St. Mary’s Cathedral, Peoria.

Two weeks earlier, Holy Family enshrined an image of Blessed Marie Clementine — a martyr from the Democratic Republic of the Congo who was beatified by Pope John Paul II in 1985. Her image will represent parishioners who are first-generation from Africa. Among those attending that liturgy were several Congolese Catholics living in Iowa.

“This parish is very welcoming,” said Father John Grigus, OFM Conv., pastor, pointing to the presence of many first-generation families from nations including the Philippines, India, Vietnam and others. The shrine project to recognize the various cultural and religious traditions is among the finishing touches of a recent major church renovation. It is being planned and carried out by a new cultural ministry with representatives from the various ethnic backgrounds.

Six more ceremonies are planned throughout 2014 to enshrine statues or images representing other backgrounds, including:

With the exception of the Immaculate Conception statue — a fixture in the sanctuary — all images will be placed along walls in the church interior.
The ethnic shrines will have descriptions of the images, biographies of those they represent, prayer cards, and votive candles.

He told The Catholic Post that the images have been obtained and financed by parishioners from that culture. Many were purchased in the native countries and lovingly transported here by committee members or others.

The only image yet to be obtained is the Mother of Africa image from the national basilica. Father John explained there are no copies of the statue available, not even in the basilica gift shop. When its image is enshrined at Holy Family, it will be only the second church to display it.

While the parish is culturally diverse, it is also united, said the pastor.

“This unity is that we are all created in the image of God; to know Him, to love Him and to serve Him,” said Father John. “Our diversity allows out different cultures to develop and flourish as individual communities and our unity brings these individual cultures together to grow as one family for the praise and glory of God.”

Both Father John and Deacon LaHood said the blessing of the Immaculate Conception statue a year from now is a fitting conclusion. Parish leaders said it would be too difficult to represent all the European backgrounds of parishioners.

“It’s a melting pot,” said Father John. “But it’s important to emphasize those of European background and give thanks to them — the community that established this church is now welcoming others.”