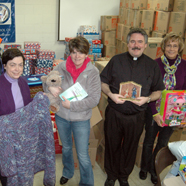 Photo Caption: With just some of the clothing, toys, and other gifts given St. Patrick Church and School in Washington are, from left, Doreen Shipman, Christine Serangeli, Father Stephen Willard, and Stephany Bina.

WASHINGTON — As coordinators of tornado relief at St. Patrick Parish here reported Monday on both the “extreme” generosity and remaining needs a month after the storm, Father Stephen Willard, pastor, interrupted to reveal the contents of a just-delivered envelope.

“St. Andrew Church from Moore, Okla., just sent $5,000,” he announced, holding the check for all in the parish office to see. Moore is the Oklahoma City suburb hit by an EF-5 tornado last May that killed 23 and injured 377.

The gift from Moore was the latest of 6,000-plus financial donations totaling more than $400,000 that have come to St. Patrick Church and School from across the U.S. since a series of tornadoes raked the Midwest — including several communities in the Diocese of Peoria — on Nov. 17. The strongest was a powerful EF-4 twister that tore through about 1,000 homes in the western neighborhoods of the Tazewell County community of Washington and surrounding areas.

St. Patrick Parish quickly established a relief fund to assist its most impacted members, and a preliminary accounting of donations was revealed at Masses the weekend of Dec. 7-8. In addition to the cash figure, about $41,000 has been received in the form of gift cards. During an interview with The Catholic Post on Monday morning, another delivery brought a box of containing 45 Wal-Mart gift cards for $25 each — a gift from St. Joseph Parish in Dodgeville, Wis.

“Let’s just say the numbers continue to climb because of the extreme generosity of people across the country,” said Stephany Bina. She and fellow volunteer Christine Serangeli are leaders of a core team assisting parish staff and dozens of volunteers in church-based relief efforts.

“It gives you so much hope,” added Serangeli. “People really have opened their hearts to us. And we want them to know how thankful we are because we have received so much.”

To that end, the parish plans to acknowledge the gifts, perhaps utilizing children from the parish school to help write thank-you notes. But in this time of challenge, that task is daunting as well.

“How do you ever get that kind of gratitude out?” asked Bina.

LONG-TERM NEEDS
As word of the devastation spread in the days immediately following the storm, material donations of food, clothing, and household supplies filled the school gym, which served as a relief center for two weeks after the tornado struck. The goods soon overflowed into a semi-trailer, box truck and storage pod. Most of those remaining supplies have now been forwarded to long-term storage and distribution areas, including one coordinated by Catholic Charities of the Diocese of Peoria in the former SHARE Food warehouse in Peoria.

However, “financial donations will continue to be needed for a long time,” said Bina.

She explained that St. Patrick initially worked to identify and contact 150 parish families whose homes were either totally destroyed or had major damage.

“We made a decision early on to issue checks to those people,” she said, crediting parishioner Kim McMurray for making calls to all of them. “They had a lot of immediate expenses,” said Bina. They were living in temporary places, going out to eat a lot, they had to try to get a car.” Because so many addresses have changed, some checks may still be in transit.

Next, the parish will create a plan to assist those in continuing financial need, including the uninsured, underinsured, or persons who have lost jobs or significant income.

“It will get fairly challenging,” said Bina, indicating that a trained team will be required to assess family financial needs. “We’re all praying for the Holy Spirit to guide us in this.”

Many individuals and companies have expressed an interest in “adopting” individual families in need. For several reasons, the parish has hesitated to make those connections, and only does so after the family agrees.

“How do we choose who receives those funds?” asked Serangeli. “It weighs heavily on you to make those decisions.”

AS CHRISTMAS APPROACHES
Meanwhile, time and lives go on, and Christmas is approaching. This hasn’t been the Advent that Father Willard, who arrived at the parish in June, envisioned in terms of programs. But it has been a profoundly spiritual time nonetheless.

“In Advent we focus on Christ alone, focus on heavenly things, not earthly things,” he said. A time of adoration of the Blessed Sacrament has been added on Thursday evenings.

Affected families repeatedly have told Father Willard “we don’t need presents, we have each other.” He marveled at how those in need constantly “put themselves last,” asking that help be offered to others first.

There have also been evangelization opportunities as assistance is also offered to those who may have fallen away from the church, as well as non-Catholics.

“People are overwhelmed at how much the parish has been there for them,” said Father Willard. “They look at this place as family.” With so many of its members scattered, the church — undamaged by the storm — has become even more a home, “a place where we’re united.” People are staying longer after Masses, sharing stories, offering and receiving hugs.

Music director Monica Mueller, who also serves as a parish secretary and is highly involved in the recording and acknowledgement of gifts, said the parish has heard from many former parishioners now living elsewhere.

She noted that the disaster impacted every aspect of parish ministry. Citing just a few examples, she said two choir members were left homeless, the CCD director lost her home, and 100 school students now have different addresses and transportation needs.

Mueller laughed as she acknowledged that because of other focuses the music this Christmas will be “exactly what we did last year.” But that’s OK for other than obvious reasons.

“We have a new priest,” she said, looking at Father Willard. “He hasn’t heard it before.”

— Call Center, to handle the thousands of calls from parishioners, volunteers and donors.

— On Site Work Crew, to assist affected parishioners with collecting items from their damaged or destroyed homes and remove debris.

— Housing Assistance, to identify and track homes open for rent or purchase.

— School and CCD, to assist teachers and staff with providing information to parents, gather information from families on their needs, and assist children with the transition back to school.

— Finance, to set up procedures for accepting, tracking, banking, and accounting for funds received and how they will be disbursed.

In addition, members of the core team lauded the efforts of the many parishioners who assisted with the relief center in the school gym. That, too, was organized into teams including those who welcomed people to the center and assisted them, those who accepted donations, organized them, and the prepared and served food to those directly affected and the volunteers.

“I wish we had an estimate of how many volunteers assisted — thousands of hours, 15 days straight,” said Bina.

“Your heart just aches for all your friends,” admitted Mueller. “It’s your family. Your church family.” She recommended that the parish create a map to show where donations originated. Among the places pins would be placed are other regions that have known disaster, including Plainfield in Illinois and Newtown, Conn., site of the Sandy Hook School shooting a year ago.

Serangeli said the generosity shown to the tornado victims has left everyone with renewed hope.

“Sometimes you get down regarding the world in general,” she said. “But this is such a hopeful sign. It’s overwhelming.”

Father Willard reminds parishioners that believers in Jesus are “a people of hope.”

“We will rise from this because God will be our stronghold,” he said.