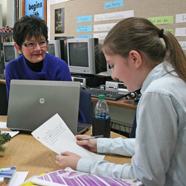 Photo Caption: Jodi Peine listens to sixth-grader Emma Mueller at St. Philomena School in Peoria. Peine has been selected as on of 10 to receive the Distinguished Principal Award from the NCEA.

She’d much rather take you on a tour of her school, St. Philomena in Peoria, and tell you about the highly anticipated science, technology, engineering and math program that will be introduced next semester, the rigorous religious education program, or the common instructional language the teachers have adopted to help students learn and thrive from year to year. Then there’s the well-regarded art program that has generated student exhibits around Peoria.

“Our mission is truly to have kids that are informed, formed and transformed through the knowledge and love of Christ,” she told The Catholic Post. “How do you ever reach that destination? It’s a journey. We just continue to move forward and refine what we do and make it better.”

Dr. Sharon Weiss, superintendent of Catholic schools for the Diocese of Peoria, noticed those efforts and so did officials at the National Catholic Educational Association. Earlier this month, Kathy Mears of the NCEA Department of Elementary Schools notified Peine that she had been selected as one of 10 Catholic school leaders to receive the organization’s Distinguished Principal Award.

Peine will be recognized at the 2014 NCEA Convention and Expo in Pittsburgh next April.

The award is also used to surface nominees for the U.S. Department of Education National Distinguished Principal Award, which is sponsored by the National Association of Elementary School Principals.

“I am delighted at the recognition of Mrs. Jodi Peine as one of the top 10 most distinguished Catholic school principals in the nation,” Weiss said.

“One only has to walk into St. Philomena School and visit the classrooms to sense the high performance of learning that is taking place and to observe the engagement of the teachers and their students,” she said. “She is truly a caring leader who freely shares with other school leaders what she has implemented for curriculum and instruction at St. Phil’s.”

Peine said she’ll go to Pittsburgh to claim the award, but it really doesn’t belong to her.

“This is an award for the parish,” she emphasized. “This is a culmination of years of hard work, devotion, strategic planning. It has been a group effort. This is really a parish award.”

“Our competition — our children’s competition — is sitting in classrooms in Bangalore and Rio and Singapore and Saigon,” she explained. “Those kids are hungry for the American dream and they’re willing to make sacrifices for that. That’s the world our children need to be prepared to step into and lead as solid Catholics.”

Knowing that gives Peine and her staff a sense of what learning has to look like to make certain St. Philomena students are prepared “for a world we don’t know and jobs that don’t exist yet.”

“We can’t train our kids in jobs that are going to exist, but we can train them in knowledge and skills that will allow them to function forever in an ever-changing world,” she said. “When you take that and anchor it in their faith and the values instilled with their faith, that’s a winning combination.”

Peine started her own preparation at Bradley University, where she earned a bachelor’s degree in elementary education and a master’s degree in educational administration.

She taught in East Peoria public schools and served as enrichment coordinator for District 86 for several years before being named principal at Tremont Elementary School in 1993. She added duties as director of curriculum and instruction for Tremont District 702 in 2000.

She retired in 2006 — for about a year. Then a former student told her that St. Philomena was searching for a new principal.

While many of her friends in education have retired and can’t believe that Peine is still working, she said she stays because of what she has found at St. Philomena.

“I certainly found Christ and the many ways he manifests himself. It’s an extraordinary place because of the people,” she told The Post. “The Lord put me here and I’m figuring he’s going to tell me when it’s time to exit.”