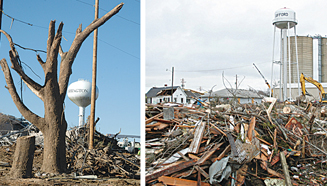 The diocesan Office of Finance released the latest update as The Catholic Post went to press on Tuesday.

Bishop Daniel R. Jenky, CSC, asked all parishes to conduct a second collection in response to the tornadoes that struck several regions of the diocese on Nov. 17. The funds will be distributed throughout affected areas of the diocese by Catholic Charities of the Diocese of Peoria.

Catholic Charities is now operating a long-term storage and distribution site at the former SHARE Food warehouse in Peoria for items donated from across the country to tornado victims.

Fifteen counties were declared federal disaster areas as a result of the storms, including Champaign, Douglas, Fayette, Grundy, Jasper, LaSalle, Massac, Pope, Tazewell, Vermilion, Wabash, Washington, Wayne, Will and Woodford. Hardest hit in the Diocese of Peoria were the Tazewell County community of Washington and the Champaign County village of Gifford.