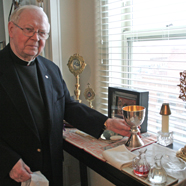 Photo Caption: Msgr. Albert Hallin stands in front of the small altar in his apartment at Inman Place in Champaign.

CHAMPAIGN — In the living room of his cozy Inman Place apartment here, Msgr. Albert Hallin has a small altar where he celebrates Mass. Resting on it is the chalice his family and friends gave him for his 1961 ordination.

Like his priesthood, the places on the chalice that have been touched by his hands over the last 52 years are brighter than the rest. In both cases, that is by design.

“I’ve tried to put whatever I had at the service of everybody,” he said. “What do you need? If I can do it, count on me.”

True to his word — and the Word of God — Msgr. Hallin begins a series of Scripture reflections in The Catholic Post this week that will take readers through the seasons of Advent and Christmas. (Read his first column here.) A longtime student of Scripture, he wanted to continue to share his insights after being named a senior priest of the Diocese of Peoria and pastor emeritus of St. Boniface in Seymour in 2012.

He is grateful to be able to do so, especially since his retirement coincided with a serious health scare.

In 2011, Msgr. Hallin collapsed just before Mass was about to end one Sunday at the Seymour church. In the days that followed, doctors discovered that he had a tumor on his brain.

“It was a slow-growing one and I might have had it since I was a child,” he explained. “At the time they didn’t think it was operable.”

When it was determined that the tumor could be removed, he went to OSF Saint Francis Medical Center in Peoria for the surgery. He decided to retire to Champaign — where he had served at St. Matthew Church, Holy Cross Church and St. John’s Catholic Newman Center and was a driving force behind The High School of Saint Thomas More — to be close to his doctors and nurses.

His schedule leaves little doubt that he’s in fine form, however.

Msgr. Hallin is involved in the RCIA process at St. John’s Catholic Newman Center at the University of Illinois, hears confessions there and does whatever he can to help out. He also assists at area parishes and gives presentations, classes and talks to various groups.

LIFELONG LEARNER
Born in Chicago on Feb. 3, 1929, Msgr. Hallin originally intended to join the Priests of the Sacred Heart in Hales Corners, Wis. He attended the community’s high school seminary in Donaldson, Ind., and college in Wisconsin for two years, and professed vows for three years.

Realizing life in a religious community wasn’t a good fit for him, he entered the Navy in 1951 and served as a hospital corpsman for four years. It was during this time that two chaplains from the Diocese of Peoria — Father John Wissing and Father Francis Cahill — recognized his priestly vocation and helped him to accept God’s call.

“They were both happy men. They were happy in their priesthood and they were happy to the people they served, both of them,” Msgr. Hallin told The Post. “They were men of their word, too. Both of them wrote on my behalf.”

Accepted by the Diocese of Peoria, he completed his studies for the priesthood at St. Paul Seminary in St. Paul, Minn. He was ordained on May 28, 1961, at St. Mary’s Cathedral in Peoria by Bishop John Franz.

Msgr. Hallin discovered his love for teaching as a seminarian and had opportunities to do that as parochial vicar at Holy Family and the Academy of Our Lady, both in Peoria. In 1964, he was named full-time chaplain and head of the religion department at Bergan High School, which later became Peoria Notre Dame High School.

“I came to believe very early that the cardinal principle of Catholic education is that it’s education formation,” he said. “It’s virtue formation. It’s really looking at that kid as a whole.”

His first assignment to Champaign came in 1978, when was assigned to be co-pastor of St. Matthew Parish with Father Bill Feeney. His other pastorates include St. Anne in East Moline, St. Mary and Sts. Peter and Paul in Westville, St. Columba in Ottawa, Holy Cross in Champaign, and St. Boniface in Seymour and St. Joseph in Ivesdale.

It was while he was pastor at Holy Cross that The High School of Saint Thomas More was built. Bishop John J. Myers told Msgr. Hallin that he probably would get one chance to build a Catholic high school in his lifetime and that it had to be done right “from the ground up.”

The priest was adamant that the school be authentically Catholic and inclusive of people at all academic levels and physical abilities. He remained involved on the central governing committee and pastors’ board for a decade after the school opened in 2000.

Msgr. Hallin has also served briefly at Sts. Peter and Paul in Chatsworth and St. Mark’s in Peoria, as a resident chaplain at the motherhouse of The Sisters of the Third Order of St. Francis in East Peoria, and as vicar of the Danville, Ottawa and Champaign vicariates. On the diocesan level he was director of PreCana and episcopal vicar for ecumenism.

He was named a prelate of honor with the title of monsignor in 1993 and a protonotary apostolic in 2007.

“I appreciate the responsibilities and the honors that I received from the bishops I served under,” he said. “They gave me a lot of responsibility and demanded performance to match it.”

It has given him joy to be a lifelong learner and placing that knowledge at the service of the students and parishioners entrusted to his care. He takes that particular responsibility very seriously.

“The first believer has got to be me,” Msgr. Hallin said.” I think that’s what I brought to my students.”