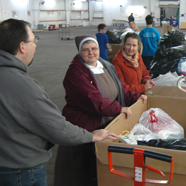 Photo Caption: Sister Ana Pia Cordua, SCTJM, director of Catholic Charities of the Diocese of Peoria, joins volunteers in examining an early shipment to the warehouse at 1825 N.E. Adams St. in Peoria.

A large warehouse owned by the Diocese of Peoria and vacant for nearly three years is now bustling with relief activity for tornado victims throughout central Illinois.

“We’re open to all in need,” said Sister Ana Pia Cordua, SCTJM, director of Catholic Charities of the Diocese of Peoria, as she directed staff and volunteers in receiving another truckload of relief supplies that pulled up to the loading dock of the former SHARE Food warehouse at 1825 N.E. Adams Street in Peoria.

The diocese learned of the need for overflow warehouse space from the City of Washington on Saturday, Nov. 23. After it was determined that the SHARE building could be utilized, volunteers joined Catholic Charities and diocesan staff in cleaning the facility and re-starting the long dormant heating unit.

Bishop Daniel R. Jenky, CSC, has asked Catholic Charities to oversee the operation. While Sister Ana Pia said she was told it would be a “long-term project,” her preference is the donated clothes, household items, food, toys, etc., have a short stay.

“We don’t want to keep it for long periods of time if people need them,” she told The Catholic Post. “We want as many as possible to come.”
Catholic Charities staff this week were devising how the supplies can best flow throughout the region — including to communities such as Gifford in Champaign County.

“Catholic Charities does not have a large staff,” said Sister Ana Pia. Volunteers will be needed to receive donations and distribute them. Several groups assisted in the warehouse’s opening days.