LaSalle native in promotions for Retirement Fund for Religious 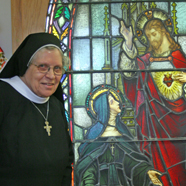 Photo Caption: Sister Josephine Rosenkranz, OSF, stands by a stained glass window depicting the Sacred Heart of Jesus at the motherhouse of the Franciscan Sisters of the Sacred Heart in Frankfort.

FRANKFORT — She can’t quite put her finger on it, but Sister Josephine Rosenkranz, OSF, was always attracted to the women religious who taught her at St. Joseph School and St. Joseph Commercial High School in LaSalle.

The second of Bernard and Louise Rosenkranz’s three daughters, she was asked what she planned to do after her older sister got engaged.

“I’m going to the convent tomorrow,” she told her mother, and she did.

Sister Josephine remembers arriving at the Frankfort convent of the Franciscan Sisters of the Sacred Heart at 2 p.m. on Sept. 26, 1954, even before her postulant clothing was ready. It has been her home ever since.

As Catholics prepare to support the Retirement Fund for Religious this weekend, hers is one of the happy faces they will see on the promotional materials designed by the National Religious Retirement Office in Washington, D.C. This is the 26th year for the appeal, which has provided more than $660 million in financial support to religious communities across the country.

In 2012 alone, $23 million in direct care assistance was awarded to 440 religious communities — an average of $932 for every member of an eligible Catholic religious community that is 70 or older. It is estimated that more than 34,000 senior Sisters, Brothers and religious order priests benefit from the collection.

Last year, the people of the Diocese of Peoria helped to meet the need by contributing $131,640 to the Retirement Fund for Religious.

While the Franciscan Sisters of the Sacred Heart do not receive direct assistance, members of the community’s leadership team have participated in an elder-care consultation with staff from the National Religious Retirement Office.

“If someone else needs it more, give it to them,” Sister Josephine said simply.

“HERE I AM”
Her parents weren’t really surprised when their middle daughter, then known by her baptismal name of Rita, decided to enter religious life.

There were five Catholic parishes in LaSalle when she was growing up and the Rosenkranzes belonged to St. Joseph. Every Wednesday she would walk the four blocks to church for the novena to St. Joseph.

“I think that’s why I have such a great devotion to St. Joseph and so did my father,” she told The Catholic Post.

Her choice of community didn’t come as a surprise either. Her father also had a devotion to the Sacred Heart of Jesus and a large image was enthroned in their home.

Her mother knew the Franciscan Sisters of the Sacred Heart from her work at St. Mary’s Hospital in LaSalle, which was operated by the community. As a young woman, Louise had been asked if she was going to the convent.

Granted her request to take the name of Josephine, she professed first vows on Aug. 3, 1957, and final vows in 1960. For 28 years, she worked as a teacher at schools in Indiana and Illinois, teaching everything from kindergarten to sixth grade. Math and history were her favorite subjects.

Her last 15 years as an educator were spent at Peru Catholic, where she taught fourth grade.

After returning to the motherhouse in 1987 to work in the accounting office, Sister Josephine started using her baking skills to help her community. That desire has grown into a bake sale to top all bake sales during a “garage sale” hosted by the Franciscan Sisters of the Sacred Heart the weekend after Labor Day. Her baked goods fill the library and some of the treats are eaten even before people have a chance to pay for them.

She starts baking in January, but at 76 she is grateful to have help from her Franciscan Sisters, her family and other interested people to prepare the 1,600 cookies, 200 quick breads, brownies and other goodies that make the day a success. This year the garage sale raised $40,000 to support the community’s mission in Brazil and ministries with the poor.

Her secret for a contented life?

“I take each day the way it comes,” she told The Post. “Being a Franciscan Sister of the Sacred Heart gives me peace of heart ? this is where God wants me.”