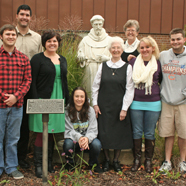 Editor’s Note: This is the second in a monthly series profiling college campus ministry in the Diocese of Peoria.

MACOMB — When it comes to sharing faith, don’t discount the power of a good cup of coffee. Just ask Megan Willis, one of the campus ministers at St. Francis of Assisi Catholic Newman Center at Western Illinois University.

“I kept finding that if I asked students out for a cup of coffee the conversation always went somewhere,” she recently told The Catholic Post. “That became daily and weekly dates with people, which turned into discipleship, which turned into relationships.”

At that point she can take them to the next level, which is an invitation to come to the Newman Center for Mass, a Bible study, Koinonia retreat, RCIA, a service trip or just some quiet time in the chapel to pray. Sometimes she offers suggestions for how they can share their gifts, such as joining her in music ministry.

Another attraction could be the monthly bonfires hosted by Leo Quinn, who joined the staff as a campus minister in 2012. Whether it’s 90 degrees or 40 degrees, fellowship is forged over s’mores, music and conversation.
“He takes his guitar out there and just gets to know people,” said Sister Janice Keenan, OSF, director of the St. Francis of Assisi Newman Center since 2011. “He knows everybody by name.”

That personal connection is important at a time when social media is allowing people to communicate but not fostering interactions, Quinn said.

“In small groups, like my Bible study and Megan’s, the fear of that vulnerability dissolves a little bit and the Gospel message becomes more accessible,” he explained. “It’s really interesting to see that wall come down.”

NOT JUST WORDS
While they strive to offer a warm welcome to those who come through their doors, the campus ministers know they can’t wait for the students to make the first move. St. Francis of Assisi Newman Center is located about two blocks from campus and has very little visibility in the day-to-day life of the WIU campus.

Quinn said they rely on word of mouth and students asking their friends to come with them to various events.

Because students must concentrate on their classes and work, Sister Janice said she tries to make it easy for them to participate in whatever way they can.

“When we do break trips, for example, we offer them no registration fee and try to keep the costs down, she said. “If they go, which they would like to do, not only can they not pay for it but they’re going to lose a week of work. That’s hard because they’re paying for school.”

If they choose to come to one thing at the Newman Center each week that may be the only time they have to get away. Sister Marion Lemon, OSF, who rounds out the staff, said every little bit is important.

“Their faith is increased by the witness they see of the other students here and how it makes an impact,” she told The Post. “It’s not just the words we’re saying.”

The campus ministers are also aware that they are planting seeds for the future.

Father James Morrissey, parochial vicar at St. Paul Parish in Macomb, was appointed the Newman chaplain in 1956. The following year, Father Joseph Kelly, the new parochial vicar, organized the first Newman Club. They had no permanent meeting place until a house was purchased on Ward Street, just south of campus.

The groundbreaking for the current Newman Center took place on July 21, 1978. The project was guided by Father James Rickey, who served as chaplain for two decades, and was dedicated on Dec. 10, 1978, by Bishop Edward O’Rourke.

In recent years the Newman Center has had a “facelift” with new paint and carpet, and the former priest’s apartment was enlarged to create a cozy living space for Sister Janice and Sister Marion, members of the Sisters of St. Francis of the Immaculate Conception in West Peoria.

The staff has tried to incorporate new technology in the chapel to enhance participation in the prayers and music at Mass.

Their focus remains the same, however.

“College students are at a critical time in their lives: developing their gifts and skills, making new friends, and discovering what it means to live as a young adult. They question whether the faith of their parents has real meaning for themselves,” Sister Janice said. “We connect them with peers who are trying to be followers of Jesus, offer involvement in small groups, liturgies and activities, and provide witness, wisdom and guidance to make their faith a vital part of their college — and future life — experience.”