Venerating relic a chance to reflect on John Paul’s papacy 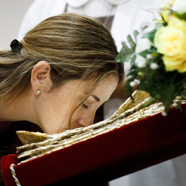 Photo Caption: A woman venerates a relic of Blessed John Paul II, a specimen of his blood, during a Nov. 5 youth rally in honor of the future saint in Miami. The relic will be in the Diocese of Peoria Nov. 18-19.

MIAMI (CNS) — Catholic students and faculty convened in Miami Nov. 5 to venerate what is considered a “first-class relic” of Blessed John Paul II and used the occasion to reflect on the life and impact of the late pope, who along with Blessed John XXIII will be canonized April 27 at the Vatican.

The relic is coming to the Diocese of Peoria Nov. 18-19. Bishop Daniel R. Jenky, CSC, has invited all Catholics to St. Mary’s Cathedral in Peoria for public and private veneration of the relic on Monday evening, Nov. 18. See details here.

“I know the last bit of his life and a few years back before I was born — John Paul II called for the youth rally in the Philippines where my family is from and where over 5 million people came for that event,” said Keanu Orfano, 13, a student at St. Lawrence Catholic School in North Miami Beach.

“My grandparents were there, and they told many stories about John Paul II to me and what a great man he was and the things he did; he traveled to many countries in the world and my mom met him in the Philippines,” said the teen.

Keanu was among 1,500 students from some 15 Catholic elementary and high schools in South Florida at a youth rally and Mass for Blessed John Paul II at St. Thomas University in Miami.

On display for the students to touch and pray with was what the archdiocese described as the “Official Relic of the Postulation of Blessed John Paul II” — a vile of the late pontiff’s blood.

“It is wonderful and a privilege to see the relics of Pope John Paul II,” said Keanu, who added his family turned out at St. Mary’s Cathedral in downtown Miami the previous day to see the relics there as part of a 10-parish tour of the relics scheduled in Miami.

“Sadly, I had not seen the pope in my life because he died when I was 5 years old, but if he had lived longer I would have been happy to see him,” Keanu told The Florida Catholic, newspaper of the Miami Archdiocese.

The archdiocesan Office of Campus Ministry along with a local congregation of women religious helped organize the youth rally as an educational and spiritual program in remembrance of Blessed John Paul’s continuous concern for young people and of his overall legacy.

The event began with contemporary Christian music and a kind of pep rally as well as a documentary film on the pope’s life presented by the Servants of the Pierced Hearts of Jesus and Mary, a Miami-based congregation of women religious.

“He attracted so many people during his lifetime that even now he is still attracting youth,” said Father Luis Rivero, Miami archdiocesan director of campus ministry.

The priest said he hoped the rally will have a lasting effect on the students by inspiring “young people to see a contemporary, modern-day saint who lived a life of holiness and simplicity in everyday life and hopefully it will attract them to do the same.”

As someone who remembers both popes, religion teacher Denise Broughton from St. Lawrence Catholic School, remembers Blessed John Paul for forgiving the man who tried to assassinate him in 1981 — a Turkish man whom the late pope visited in prison and offered forgiveness and pardon for the near-lethal offense.

“It is wonderful thing that both popes are becoming saints — popes that I knew in my lifetime and that is pretty extraordinary,” Broughton said. “I remember John Paul II for his open heart, his ability to accept all people, for being the most traveled pope, for his generosity, care and willingness to forgiveness.

“That was a pretty extraordinary thing that he did in going to the jail cell of his shooter and that he extended himself in such a manner,” she said. “That (incident) took a toll on his health.”

Bishop Fernando Isern, former head of the Diocese of Pueblo, Colo., who now lives in Miami, celebrated the Mass at St. Thomas University before the students came forward to touch the relic and receive a prayer card.

He told the students that Blessed John Paul believed deeply in young people and demonstrated through his establishment of the World Youth Day events.

“No matter your age, you have a role to play in the faith,” Bishop Isern told the students. “You are the future of the church, but you are also the present because we know what a wonderful catalyst you are in your homes, and how your parents will bend over backwards to make sure you have the best they can offer you and having a Catholic education is proof of that.”