Fr. Laible’s has ‘God moments’ as he serves wounded warriors 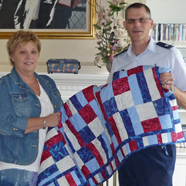 Photo Caption: Father Jeffrey Laible presents a quilt made by the Quilting Club at St. Mary, Atlanta, to the Fisher House, which provides housing for families with loved ones being treated at military hospitals.

LINCOLN — As a military chaplain, Father Jeffrey Laible has been trained to handle mass casualties. He found that nothing could adequately prepare him for what he encountered at Landstuhl Regional Medical Center in Germany, however.

“I don’t know how you can train for what you see, what you smell, what you experience,” he said of his ministry to the “wounded warriors” at Landstuhl. A lieutenant colonel with the 183rd Fighter Wing of the Illinois Air National Guard in Springfield, Father Laible has deployed five times and said each tour of duty changed his life profoundly.

“It changes my whole ministry profoundly,” said Father Laible, who has been the pastor of Holy Family in Lincoln and St. Mary in Atlanta since 2007 and all the Logan County faith communities since 2011.

“I’ve had so many encounters with the crucified and risen Christ, so many ‘God moments,'” he said. “If you’re a person of faith I don’t know how it couldn’t change you profoundly. When you brush up against the divine — it changed my life profoundly.”

Until 2004 no National Guard chaplains were involved in ministry to the wounded at Landstuhl. Father Laible was part of the third team that was deployed there, leaving on Easter Sunday in 2005.

Because of the intensity of the war and the need for Catholic chaplains he was called back to serve in July/August 2006, July/August 2008, August/September 2009, and December 2010/January 2011. During each deployment he kept a journal and in excerpts he shared with The Catholic Post he reveals “the crucified Christ is everywhere!”

“One minute I’m on the neo-natal intensive care unit, talking with a father who wants his son baptized. The next minute I am headed up to ICU to anoint a Marine who is struggling to hold on to life. His right lower foot is gone; his left leg is in pins. Internal bruises and broken ribs. Pain beyond imagination,” he says. “I offered him the Sacrament of Anointing and prayed with him. He struggled to talk. His wife called and he told her that he loved her. Heart wrenching!”

Father Laible said most of the Catholic soldiers and Marines have wanted to see a priest or receive the sacraments.

“Reconciliation and Anointing — a prayer for strength and healing. A moment when the peace and love of God can come into their hearts and souls,” he writes.

April 17, 2005
After “sitting at the foot of the cross” with a family who had lost their son, Father Laible found it difficult to sleep.

“The image of Simon helping Jesus carry his Cross (the Fifth Station) circled around in my mind. And never have I had such a profound experience of the Stations of the Cross as I have had here at Landstuhl Medical Center,” he says in his journal. “Each day we are called to be Simon — to help carry the burden of the Cross that weighs heavily upon the soldiers, sailors, airmen and Marines.”

June 3, 2005
“Wherever you find suffering, you find Jesus,” Father Laible writes. “Wherever you find broken humanity, you find the Lord. There He is, disguised — wounded and broken, vulnerable and humble — waiting for someone to care for him. And here you are: sent to be a visible reminder of the Holy.”

July 26, 2006
“In the wounded you see Christ. I saw Christ today,” the chaplain notes, as he talks about the people he served during his second deployment. “Christ surrounded me today.”

“Help me, God, to see your face as I bring the Sacraments of the Church to the wounded warriors. Help me be present to these brave young men and women who have given so much,” Father Laible prays. “Help me to take their stories back to the USA and let the average American who worries about all the wrong things to ‘wake up’ and remember the cost of freedom.”

Sept. 7, 2009
Called to offer pastoral care to Thomas, a seriously burned French NATO soldier, Father Laible administered the sacraments of baptism and anointing — and eventually last rites. Those sacraments offered Thomas what no one else could provide, he said: life with Christ forever.

“The Sacraments have their own language. Regardless of whether we understand one another’s verbal language, the Sacraments convey God’s love and presence . . . across Nations and nationalities, language, culture and life experiences,” Father Laible writes.

As Veterans Day approaches, Father Laible said he wants people to remember “the tremendous sacrifices that our service members and their families make on behalf of the many freedoms that we enjoy as Americans.”

“I would also ask our citizens to not only pray for our troops daily, but also to support their local American Legion, VFW, veterans’ organizations, veteran centers, and VA hospitals and clinics,” he said.

For other ways to help, he recommended visiting the websites for the Landstuhl Hospital Care Project (landstuhlhospitalcareproject.org), Fisher House Foundation (fisherhouse.org), and Wounded Warrior Project (woundedwarriorproject.org).

A PRAYER FOR VETERANS

In every age, O Lord, you call men and women to defend the human family from oppression, tyranny, and evil. Since our founding as a nation “conceived in liberty,” countless Americans have stepped forward to defend our country and many others from aggressors, and to liberate those held captive.

Today we revere all our veterans: those who rest in honored glory, those who still suffer from the wounds of war, and those who, with us, enjoy the blessing of living in the land of the free and the home of the brave.

O God, thank you for the selfless sacrifice of these veterans and of their families. Help us to remember them, to pray for them, and to care for them. Please bring all our departed veterans into your Kingdom, and console their families with your unfailing love. Please heal our wounded veterans through the power of your Holy Spirit, and give to all our veterans the satisfaction of having served You even as they have served us.

Thank you for your gifts of life, liberty, and the pursuit of happiness. May we fight to keep these rights available to all. And we make our prayer in your Holy Name. Amen.