‘Deep disappointment’ over vote to redefine marriage in Illinois 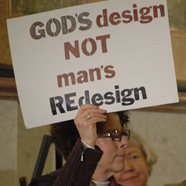 Photo Caption: A woman holds a sign during a Defend Marriage Lobby Day that drew 2,500 people from throughout the state to the Capitol in Springfield on Oct. 23.

SPRINGFIELD — The Catholic Conference of Illinois expressed deep disappointment at the Illinois House’s passage on Tuesday of legislation redefining marriage in the state from “between a man and a woman” to “between two persons.”

“Today’s decision by Illinois lawmakers to change the definition of marriage not only goes against the common consensus of the human race — which understands that nature tells us that marriage is the union of one man and one woman — but it also undermines an institution that is the cornerstone of a healthy society,” said CCI in a statement. The Catholic Conference of Illinois serves as the public policy voice of the Illinois bishops.

“The optimal condition in which to raise children is a home that includes both a mother and a father, since women and men are not interchangeable,” the statement continued.

The Illinois House late Tuesday voted 61-54 — one vote more than required — to send the measure back to the Senate to change the bill’s effective date. The Senate, which had already approved the measure in February, quickly forwarded the legislation to Gov. Pat Quinn, who has pledged to sign it into law. Illinois would become the 15th state to allow same-sex couples to legally marry.

“The Catholic Conference is deeply disappointed that members of the General Assembly chose to redefine what is outside of its authority: a natural institution like marriage,” continued the CCI statement. “We remain concerned about the very real threats to religious liberty that are at stake with the passage of this bill.”

Robert Gilligan, executive director of the Catholic Conference of Illinois, wrote a column published Nov. 6 by RealClearReligion that was titled “The End of Religious Liberty in the Land of Lincoln”.

“During floor debate, lawmakers threw out words such as ‘equality’ and ‘fairness,’ said Gilligan. “But one important term was glossed over ? religious freedom.”

While the bill, SB 10, was titled the “Religious Freedom and Marriage Fairness Act” and lawmakers assured faith groups and religious organizations that churches nor clergy would be forced to solemnize any same-sex marriage, Gilligan asked “Where have we heard that before?”

He pointed to similar promises during floor debate on civil unions three years ago. Within six months of its implementation, all Catholic Charities in the state were pushed out of foster care and adoption services because of their “religious belief of not placing children with unmarried couples, be they heterosexual or homosexual.”

“We know better this time,” said Gilligan. “We know our religious freedom is not protected.”

The Thomas More Society, which has been at the forefront of defending traditional marriage in Illinois, called Tuesday afternoon’s vote “regrettable.” But in a statement following the vote, the Society said it did take some reassurance at legislators’ insistence tha Illinois’ Religious Freedom Restoration Act and other constitutional and statutory guarantees of religious liberties “remain in full force and effect.”

“We will do our part to insure that those fundamental religious liberties are given robust and unstinting protection,” their statement read.

Writing against the bill in February, Bishop Daniel R. Jenky, CSC, said it “will actively seek to redefine marriage, resulting in detrimental repercussions to traditional marriage, religious liberty, parental rights and society as a whole.”

“We thank the thousands of citizens across Illinois who joined us in our efforts to preserve marriage in law,” said the Catholic Conference of Illinois statement. “This was a truly bipartisan and ecumenical effort, reflective of the fact that a marriage is universally understood as being between a man and a woman.”

More than 2,500 Illinois residents traveled to Springfield on Oct. 23 to lobby legislators against the bill. The Catholic Conference of Illinois supported the Defend Marriage Lobby Day, which was coordinated by the Illinois Family Institute and featured rallies with speakers from throughout the state. The previous day, supporters of the legislation had rallied at the Capitol.